Up Here Magazine Article Part 5 of 7: Blown Away in Arctic Bay 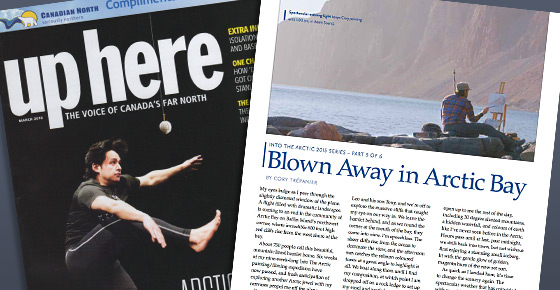 30 Mar Up Here Magazine Article Part 5 of 7: Blown Away in Arctic Bay

Posted at 16:04h in Media by oils@trepanieroriginals.com 0 Comments
0 Likes
Share

Cory’s Into The Arctic: The Last Chapter expedition field journals were published as a series in Canadian North airline’s Up Here Magazine beginning in November 2015. Here is part 5, published in the March 2016 issue.

BLOWN AWAY IN ARCTIC BAY

My eyes bulge as I peer through the slightly distorted window of the plane. A flight filled with dramatic landscapes is coming to an end in the community of Arctic Bay in Baffin Island’s northwest corner, where incredible 600 foot high red cliffs rise from the west shore of the bay.

About 750 people call this beautiful, mountain-lined hamlet home. Six weeks of my nine-week-long Into The Arctic painting/filming expedition have now passed, and fresh anticipation of exploring another Arctic jewel with my canvases propel me off the plane.

I’m met at the airport by Clare Kines, Arctic Bay’s economic development officer, and we strategize best how to use the mere 2 days I’ve managed to fit into my schedule for this visit. To begin, cameraman Ryan and I settle in on the north side of the community overlooking Admiralty Inlet, which drains into Lancaster Sound and the Northwest Passage. Spectacular evening light keeps me roaming the land and painting until 1:00 am.

Next, I’m on a boat with local guide Leo and his son Tony, and we’re off to explore the massive cliffs that caught my eye on our way in. We leave the hamlet behind, and as we round the corner at the mouth of the bay, they come into view. I’m speechless. The sheer cliffs rise from the ocean to dominate the view, and the afternoon sun catches the salmon coloured tones at a great angle to highlight it all. We boat along them until I find my composition, at which point I am dropped off on a rock ledge to set up up my easel and work for a while.

Hours pass, and as we begin the ride back to the community, I contemplate my good fortune. We arrived yesterday afternoon, and already I’ve started two paintings and have been awed by nature with great landscapes and superb light. The ride was only booked for a half a day, so I start thinking about the rest of the day around the community as the landscape whizzes by. Little did I know that Leo had other plans. Instead of turning left into the bay, we carry on right past and down Adam Sound. New dramatic views open up to me the rest of the day, including 30 degree slanted mountains, a hidden waterfall, and colours of earth like I’ve never seen before in the Arctic. Hours pass until at last, past midnight, we drift back into town, but not without first enjoying a stunning small iceberg, lit with the gentle glow of golden, magenta hues of the now set sun.

As quick as I landed here, it’s time to change the scenery again. The spectacular weather that has coincided with my visit has given way to grey skies and rain, just in time to usher me onto the plane to head further north to Resolute Bay, to begin the next chapter of my journey. But I leave Arctic Bay reluctantly. 48 hours is just not enough time to get to know such a place. I suspect I will be back again, but next time, it will have to be without a calendar.