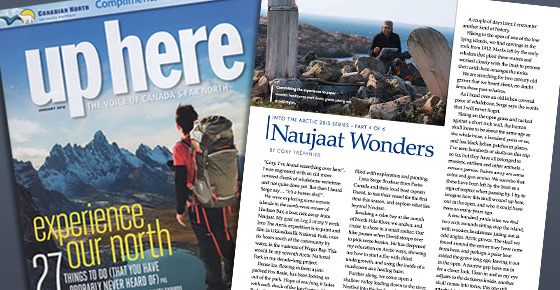 Posted at 16:06h in Media by oils@trepanieroriginals.com 0 Comments
0 Likes
Share

Cory’s Into The Arctic: The Last Chapter expedition field journals were published as a series in Canadian North airline’s Up Here Magazine beginning in November 2015. Here is part 4. Published in the February 2016 issue.

“Cory, I’ve found something over here”. I was engrossed with an old moss-covered chunk of whalebone vertebrae and not quite done yet. But then I heard Serge say… “it’s a human skull”.

We were exploring some remote islands in the north-west corner of Hudson Bay, a boat ride away from Naujaat. My goal on Leg 3 of my 9 week Into The Arctic expedition is to paint and film in Ukkusiksalik National Park, over six hours south of the community by water, in the vastness of Wager Bay. This would be my seventh Arctic National Park in my decade-long project.

Dense ice, flowing in from a jam-packed Fox Basin, has been locking us out of the park. Hope of reaching it fades with each check of the ice charts with Parks Canada staff.

Challenging as the delay is for me, the late ice had affected locals in the community far more, as they are only now, at the beginning of August, able to get their boats in the water and go out hunting for narwhal after a long ten months on the land. There’s a palpable sense of relief around town.

Fortunately for my purposes, Naujaat is situated in the middle of a stunning central Arctic landscape, and each day is filled with exploration and painting. I join Serge Brodeur from Parks Canada and their local boat captain David, to test their vessel for the first time this season, and explore what lies beyond Naujaat.

Reaching a calm bay at the mouth of North Pole River, we anchor, and cruise to shore in a small zodiac. Our hike pauses when David stoops over to pick some berries. He has deepened my education on Arctic ways, showing me how to start a fire with dried undergrowth, and uses the inside of a mushroom as a healing balm.

Further along, we come upon a shallow valley leading down to the river. Nestled into the land are four partial walls of stone – early Arctic explorer John Rae’s house. I study it closely, see how he used moss for chinking and created a well-formed window on one wall. I wonder what it must have been like to winter over in this humble abode in 1850, in this incredibly harsh climate.

I find a view that captures the scene and set up my easel. Painting this mixture of history and landscape is a thrill, and while I paint, I notice David making a fire on the opposite hillside and settle in for a nap.

A couple of days later, I encounter another kind of history.

Hiking to the apex of one of the low lying islands, we find carvings in the rock from 1912. Marks left by the early whalers that plied these waters and worked closely with the Inuit to process their catch here amongst the rocks.

We are searching for two century old graves that we heard about, no doubt from these past whalers.

As I bend over an old lichen covered piece of whalebone, Serge says the words that I will never forget.

Sitting on the open grass and tucked against a short rock wall, the human skull looks to be about the same age as the whale bone, a hundred years or so, and has black lichen patches in places. I’ve seen hundreds of skulls on this trip so far, but they have all belonged to muskox, caribou and other animals… never a person. Inches away are some coins and gun ammo. We surmise that these have been left by the Inuit as a sign of respect when passing by. I try to imagine how this skull wound up here, out in the open, and who it could have been so many years ago.

A few hundred yards later, we find two rock mounds sitting atop the island, with wooden headstones jutting out at odd angles. Arctic graves. The skull we found around the corner may have come from here, and perhaps a polar bear raided the grave long ago, leaving it out in the open. A narrow gap lures me in for a closer look. I lean in and as my eye adjusts to the darkness inside, another skull comes into focus, this one still attached to its skeleton.

As eerie as it is, the scene outside is quite peaceful; overlooking Hudson Bay as ice floats by, a warm sun filling the sky. Add to this the fresh Arctic air and remote location, and it makes this a fine place to rest in.

I reflect on it all, pull out my sketchbook, and commit the experience to paper.