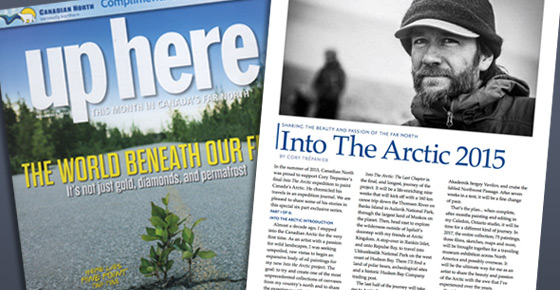 Cory’s Into The Arctic: The Last Chapter expedition field journals were published as a series in Canadian North airline’s Up Here Magazine beginning in November 2015. Here is part 1.

INTO THE ARCTIC 2015
by Cory Trépanier

In the summer of 2015, Canadian North was proud to support Cory Trepanier’s final Into The Arctic expedition to paint Canada’s Arctic. He chronicled his travels in an expedition journal. We are pleased to share some of his stories in this special six part exclusive series.

PART 1 OF 6: INTO THE ARCTIC INTRODUCTION

Almost a decade ago, I stepped into the Canadian Arctic for the very first time. As an artist with a passion for wild landscapes, I was seeking unspoiled, raw vistas to begin an expansive body of oil paintings for my new Into the Arctic project. The goal: to try and create one of the most unprecedented collections of canvases from my country’s north and to share the experience with others at the same time.

Though I had explored some of Canada’s southern beauty, the far north was completely new territory.

Now, having completed three expeditions, 50 paintings and two films, I’m back for more.

Into The Arctic: The Last Chapter is the final, and longest, journey of the project. It will be a life-enriching nine weeks that will kick o with a 160 km canoe trip down the Thomsen River on Banks Island in Aulavik National Park, through the largest herd of Muskox on the planet. Then, head east to explore the wilderness outside of Iqaluit’s doorstep with my friends at Arctic Kingdom. A stop-over in Rankin Inlet, and onto Repulse Bay, to travel into Ukkusiksalik National Park on the west coast of Hudson Bay. There I’ll find a land of polar bears, archeological sites and a historic Hudson Bay Company trading post.

The last half of the journey will take me to Arctic Bay, with its 600 foot cliffs and richly coloured mountains. In Resolute Bay I will connect with local guide Randy Nungaq, and boat east across Wellington Channel to Beechey Island, where I will come face-to-face with early Arctic explorer John Franklin. A few days later I will board a much larger vessel: the One Ocean Expeditions’ Akademik Sergey Vavilov, and cruise the fabled Northwest Passage. After seven weeks in a tent, it will be a fine change of pace.

That’s the plan… when complete, after months painting and editing in my Caledon, Ontario studio, it will be time for a different kind of journey. In 2017, the entire collection; 75 paintings, three films, sketches, maps and more, will be brought together for a traveling museum exhibition across North America and possibly overseas. It will be the ultimate way for me as an artist to share the beauty and passion of the Arctic with the awe that I’ve experienced over the years.

First though, I have another half- dozen duffle bags to pack, and an airline ticket in hand for an incredible journey about to begin.