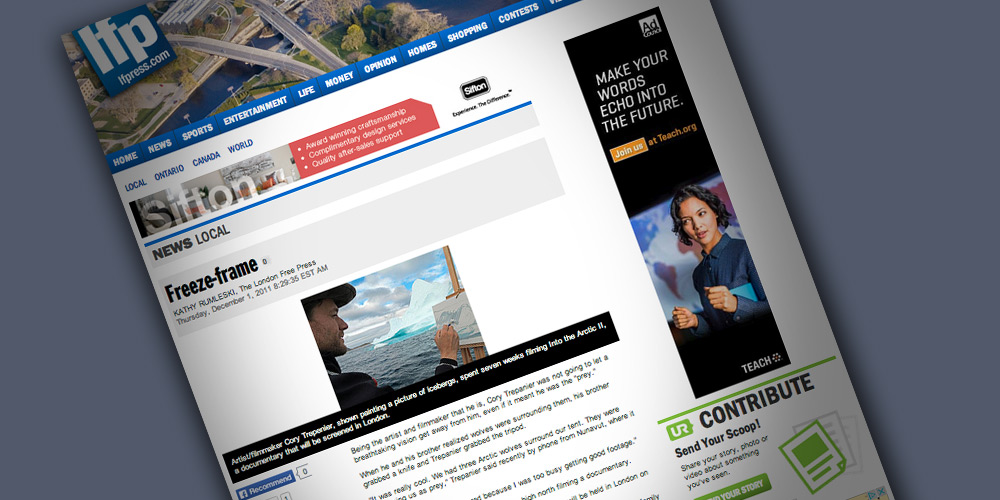 Posted at 22:44h in Media by oils@trepanieroriginals.com 0 Comments
0 Likes
Share

Read on The London Free Press website online or read below:

Being the artist and filmmaker that he is, Cory Trepanier was not going to let a breathtaking vision get away from him, even if it meant he was the “prey.”

“It was really cool. We had three Arctic wolves surround our tent. They were assessing us as prey,” Trepanier said recently by phone from Nunavut, where it was -15 C.

“I guess I wasn’t really scared because I was too busy getting good footage.”

Into the Arctic II has just premiered and a screening will be held in London on Friday.

While filming his first Into the Arctic documentary, he brought his young family with him. This time, though, he was glad they weren’t around.

Besides the wolves, polar bears were also a threat. Trepanier saw some from a boat and he also saw fresh bear tracks at two of his camps while out exploring.

“Sleeping there in the tent . . . every hour I woke up and looked around,” he recalled.

And the mosquitoes were tortuous.

“One of the most challenging wilderness painting situations ever and that is ravenous, huge and hungry mosquitoes that would just not stop.”

The Caledon artist was seeking a challenging location to explore and then paint. He got more than he bargained for in a couple of situations, but for the most part, Trepanier can’t wait to explore again.

“I started to see the Arctic as the land of the unknown and the true wilderness.

“I love painting wilderness and the lure of adventure is part of the appeal for me,” Trepanier said.

He has about 50 paintings from his Arctic experience and two-thirds of them are now complete.

His largest completed painting is 2.7 metres feet by 1.5 m and it is a scene from Mount Thor on Baffin Island, the highest sheer rock face in the world, with an elevation of 1,675 metres.

Trepanier is working on a larger work — 4.6 m by 1.7 m — based on Coronation Fiord. His painting is titled Great Glacier.

“I’d love to see it hanging at Parliament Hill, some place where a lot of people would see it each year,” Trepanier said.

Most of his paintings are in private collections.

While Trepanier set about doing his work, he also wrote a journal, filmed a video journal and took more than 1,000 photos and posted everything on his website,intothearctic.com. Trepanier has many fascinating stories.

One of his favourites is travelling with the Inuit, not as a tourist, but as someone working on the land and plying his trade.

“To actually be out there on the land with these guys was awesome. It was really a treat to connect with them on that level.”

One Inuit also brought a special edition of Monopoly, folded up into a tin. They played the game in Trepanier’s tent. “It was so cool,” he said. And he made sure he filmed it to include in his movie.

The Monopoly game seemed like a luxury because Trepanier had to carry so much gear — easel, paints, brushes and canvas mounted on panels, two HD camcorders, tripods for film and still cameras and an underwater camera — he only had necessities.

He said he had about 54 kilograms on his back and if hiking, he could only travel about a half hour at a time.

Being an adventurer, Trepanier can’t sit still for long.

Highlights from filming Into the Arctic

Most dramatic location: Sandford Fiord, on Northeaster Baffin Island. Has highest granite walls in the world.

Most beautiful: Wilberforce Falls (The painting from his trip to the Falls was considered as a gift for William and Kate.)

Biggest surprise: His brother wants to go on the next adventure, even though they spent one month in a tiny tent together. “I got to see a transformation in him.”

Warmest welcome: Billy Arnaquq in Qikiqtarjuaq, Nunavut. “I stayed in his home for a little bit. His mother was there and daughter and they were very welcoming folks and made me feel at home.”

Worst scare: After climbing down a cliff to recover a lens cap, he realized the move was “stupid and dangerous.” “It was overlooking this massive river rushing below me. The rocks were really loose. I realized if I pull any more, I’m going to get swept away. I crawled my way back out of there.”

What: Into the Arctic II