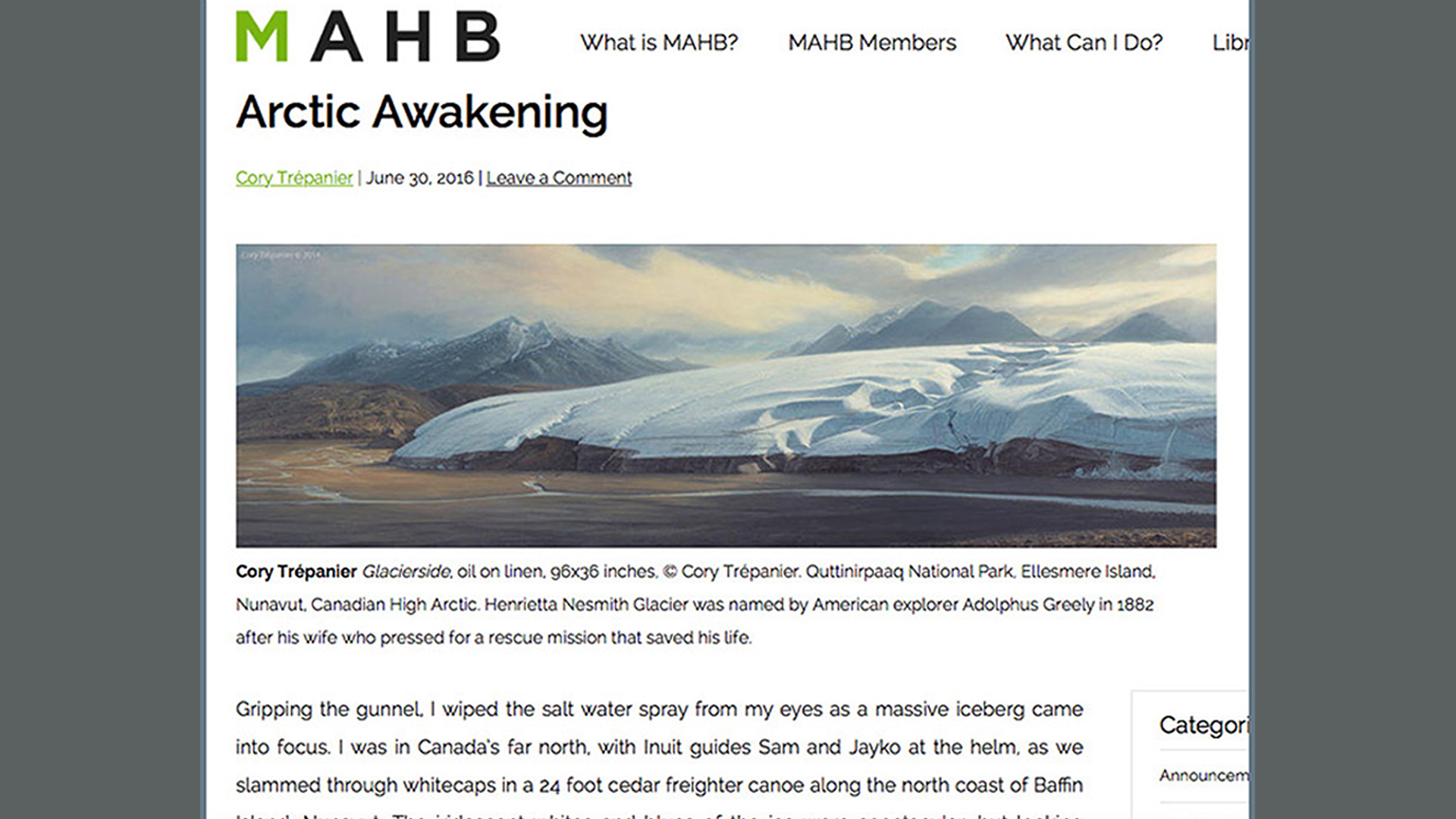 Posted at 15:57h in Media by oils@trepanieroriginals.com 0 Comments
0 Likes
Share

Gripping the gunnel, I wiped the salt water spray from my eyes as a massive iceberg came into focus. I was in Canada’s far north, with Inuit guides Sam and Jayko at the helm, as we slammed through whitecaps in a 24 foot cedar freighter canoe along the north coast of Baffin Island, Nunavut. The iridescent whites and blues of the ice were spectacular, but looking beyond, my jaw dropped further. A solid sheer wall of granite rose from the depths of the ocean and past the waterline for a kilometre toward the sky, dwarfing the berg and, unbelievably, making it seem like a spec on the water. Craning my neck, I saw a massive glacier draping over the upper edge of the wall, gushing fresh water runoff back down the rock face to eventually join the ocean below. I was entering Sam Ford Fiord, and I was speechless… again. 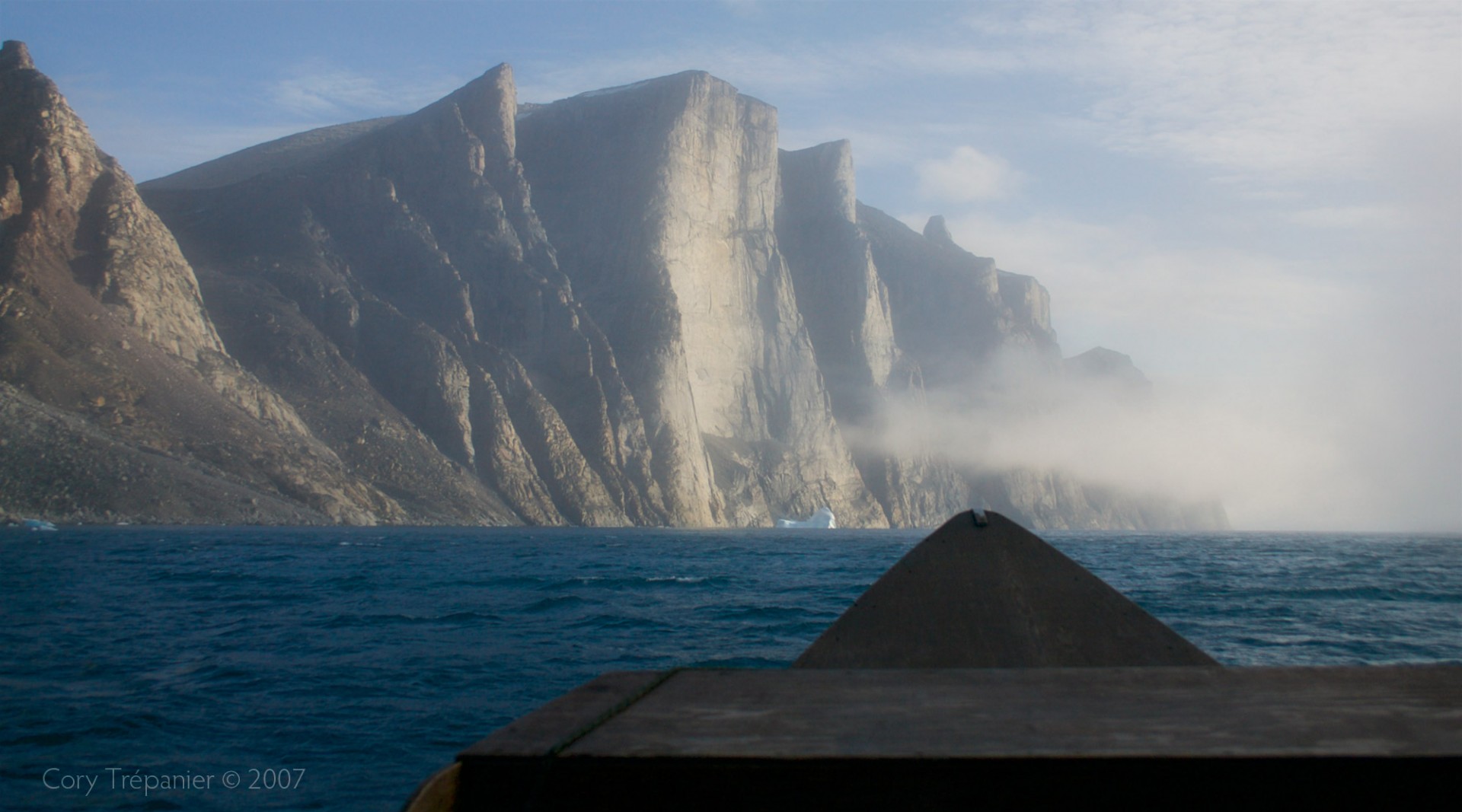 As a landscape painter, this is the place, both physically and metaphysically, that I am searching for on an expedition: a natural environment that engulfs me in an overpowering sense of awe. While I have found inspiration in much less dramatic places, the 1.5 million square kilometres of raw wilderness across Canada’s Arctic has taken the concept of a “natural high” to a new and deeper level. Capturing these rare views on canvas while experiencing the land firsthand is integral to conveying the power of nature though my art. These journeys, where day-to-day living for a month or more at a time is simplified to the basics of hiking boots, food and a tent, strip away the layers of civilization that accumulate in the studio. Traveling the land in this intimate way prepares me to experience nature’s wonder more fully. Not just the sense of awe, but the overwhelming sense of humility, brought on from the realization of how tiny I am in these expansive panoramas.

Four extensive expeditions over the last decade have taken me and my easel into some of the most remote landscapes at the apex of North America, one of the last untamed regions on our planet. These journeys have filled my world with encounters of every kind, from Arctic Wolves surrounding my tent, being watched by Polar Bears, traveling with the North’s indigenous Inuit peoples, and even crossing paths with explorers of the past, who have left their marks on the land, including a gravesite from 171 years ago. But rising above all of these are the encounters with the environment itself, a sublime combination of glaciers, icebergs, mountains, polar deserts, endless tundra, untouched rivers, ephemeral flora, often under the glow of an endless 24 hours of daylight.

In my search for authenticity and meaning in my work, I’ve come to realize that the solitary and seemingly self-serving practice of art-making can indeed have a broader impact. One doesn’t have to look far for examples in art history. In 1872, Thomas Moran’s artwork depicting the Western U.S. landscape inspired Congress to establish Yellowstone, North America’s first national park. In Canada, there’s the Group of Seven artist A.Y. Jackson, who along with the Ontario Society of Artists and other concerned citizens, lobbied for the protection of the unique Killarney landscape, which eventually became Killarney Provincial Park in 1964.

As a landscape painter, this desire to reach out beyond the canvas has been a natural progression. After all, my passions require me to study the world around me, to seek out beauty and to struggle with the challenge of its portrayal daily. Whether it’s remote and wild places that most people will never see, or drawing from nature’s more subtle details around my studio, this process has led to a greater desire and hope to see my work foster a greater appetite to care for our changing environment. Even to the extent of lugging film equipment on my journeys to create television documentaries in order to share these regions with an even wider audience.

In the end, it is our human experiences on this planet that speak to others. We are a race of storytellers. Many of these tales are being doled out in tiny pixels, briefly sped past our eyes on slick, glossy screens. While they have their place, it is my hope that through thousands upon thousands of hand-laid brush strokes, my paintings will tell the tale of time exploring overwhelmingly moving places, and inspire awareness and passion in others for many years to come.