Posted at 08:19h in Blogs-Kids by oils@trepanieroriginals.com 0 Comments
0 Likes
Share

I have never been on a plane before, and Sydney has twice, but she was only a baby. We packed our bags and waited for the plane to come. Finally, it came time to go. We got on the plane and stuffed earplugs in our ears. Then we started to go up higher and higher until we got into the clouds.

When we were almost there, we were shown a tail of a plane that had crashed there years ago, they now use it for a sign that it is very shallow water there. They also showed us an abandoned, old, broken down, barge stuck on one of the sandbars of the Arctic Ocean that surrounded Paulatuk like a peninsula.

When we arrived in Paulatuk we went to the visitor center in a truck with our gear thanks to a nice man named Ken. He also gave us a little tour of the town. 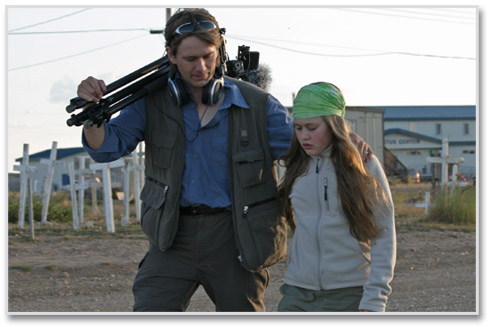 When we got to the visitor center, some of the local kids helped us take in our gear. The lady at the counter said that she had a tent that we could use, the kind that is made of wood and canvas and doesn’t get taken down at any point in time.

They attached a little platform to their truck that trailed behind them and they took the tent out to a lake behind the visitor center. We settled down and got our stuff unpacked, than we went some swimming and met some kids.