Posted at 20:31h in Blogs Only by oils@trepanieroriginals.com 0 Comments
2 Likes
Share 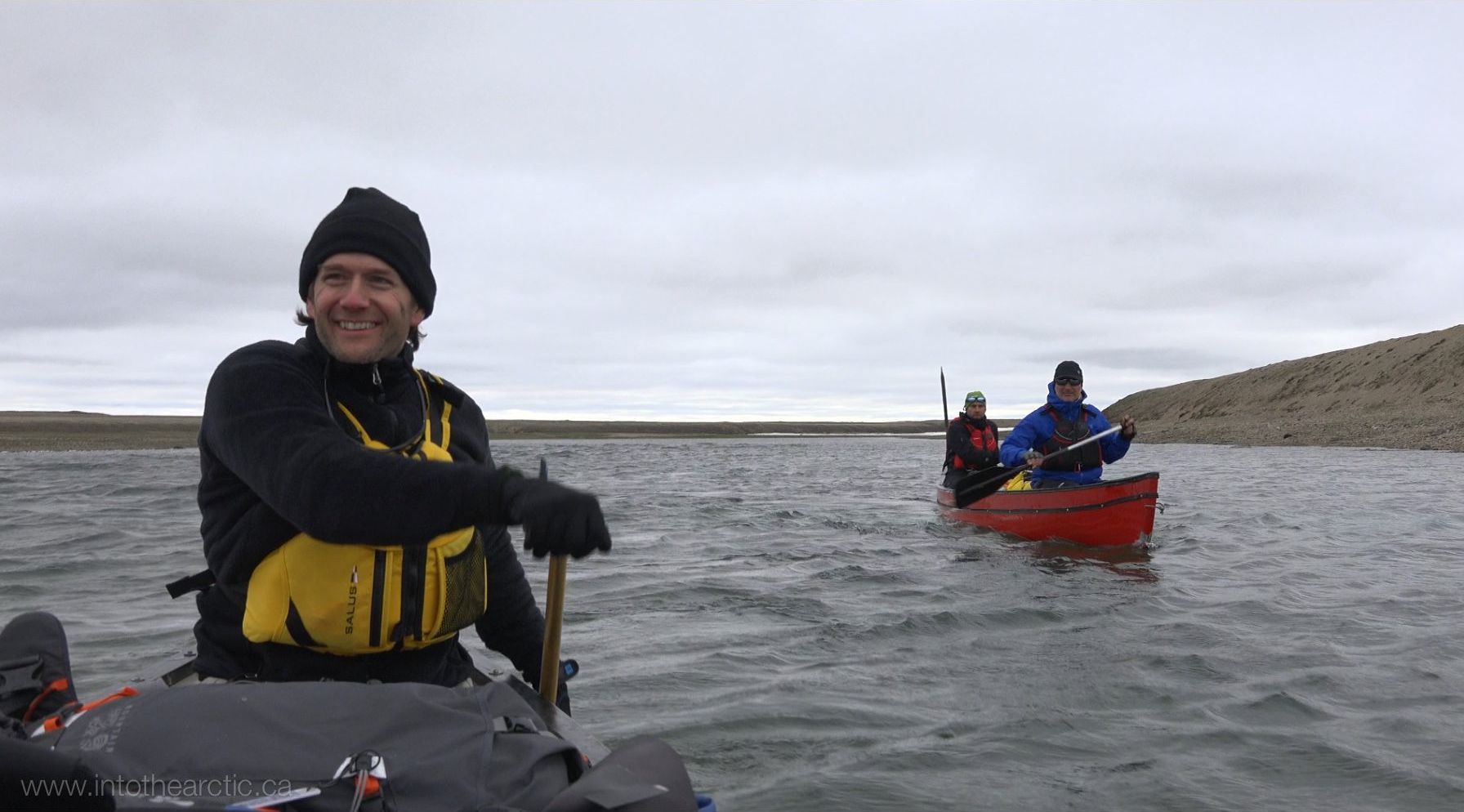 Today we have the privilege to do what few will ever get to do, dip our paddles into the Thomsen river and canoe its Arctic waters. It’s considered to be the most northernly canoeable river on the continent, and other than the 6 parks staff we met, we will be the only visitors to Aulavik this year to ply its waters and take in the views that surround it. Knowing this adds to the purpose of my being here, and I feel the need even more to share this experience with others who will never see it for themselves. We push off from shore, leave Green Cabin behind and find ourselves floating over clear, shallow waters. The Thomsen is a rather gentle river measured by the speed of its flow. There are no real rapids here. The challenge in paddling her, comes mostly in the form of wind, and we soon face that head on. The stiffening breeze causes us to dig in and start straining with every stroke. Any let up on our pace finds us being pushed back up river against the current. Hovering at around 5-6 degrees celsius the cool weather is accompanied en masse by rain, and it’s far from the sunny 15 degrees we had when we landed yesterday. 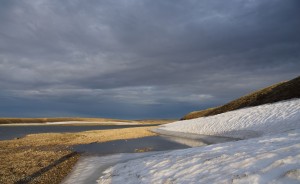 We make progress through a vast land, surrounded by hills that stretch far to the distance. While mostly varying shades of brown and tan, there are patches of green tones to compliment and accents of colourful flowers abound. Everything I’ve read gave me the impression that this is a rather flat landscape, and though it is in some places, there is far more elevation than I expected. And there are patches of snow here and there to add variety, and remind us that in fact we are very far north. We toss the fishing line in when the water looks right and Anthony hooks a little char, that promptly lets itself off the barbless hook after a jump by the canoe. At least we know we’re here.

Banks Island is known for having have the largest muskox population on the planet. At its peak it pushed around 70,000-80,000. This number has unfortunately dropped to around 15,000 in recent times, mostly due to disease of some kind. As we round the bend we find 2 of these prehistoric looking beasts grazing on a hill. We pull over to have a closer look and find a great camping spot with a view at the same time. In the distance the muskox have a peek at us while we pitch our tents, unfazed. Ryan grabs a video camera and a big Sony lens and gets some great up close footage. Dinner is awesome tonight after a day on the water. Carl cradles his meal like it’s his last dinner, and in this cool weather every bite of mashed potatoes and meat heats us up all the way down. As we prepare to turn in, the sun finally comes out to play, extending my day further with views to photograph. But its short-lived, as the clouds return. I check the solar downs one more time and notice a heard of 21 muskox that have moved in on the distant hill. What a place. 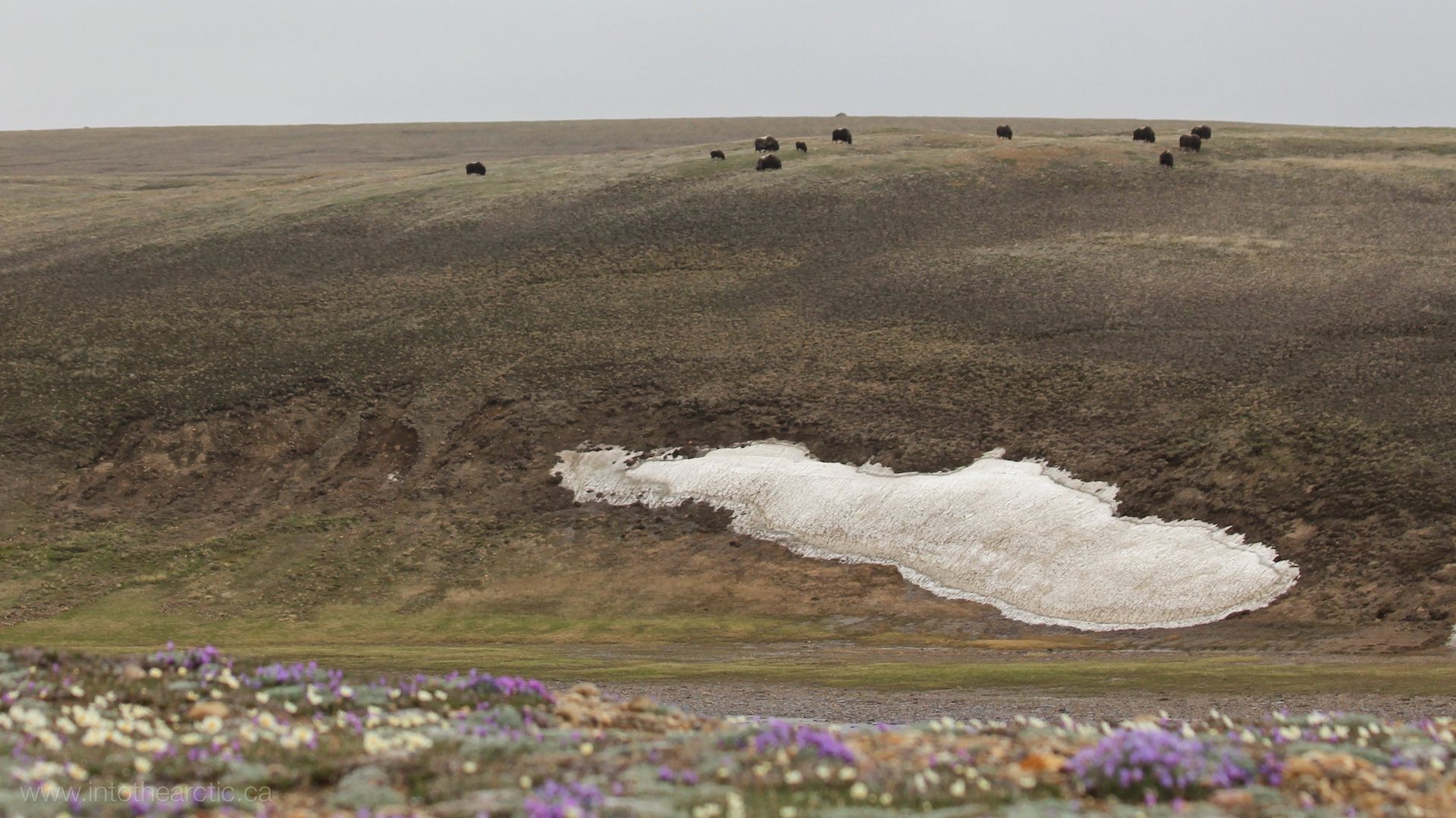