Posted at 08:20h in Blogs-Kids by oils@trepanieroriginals.com 0 Comments
0 Likes
Share 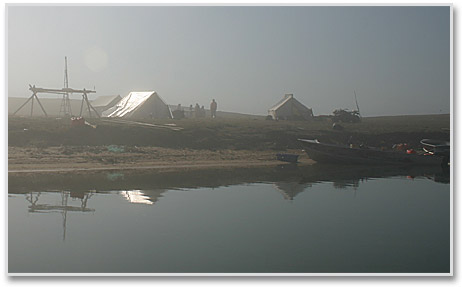 We packed up today, which was particularly a foggy day, and we took a boat to go to a fish camp past Paulatuk where we would go out to the Brock Canyons where Dad could paint.

When we reached the camp we got ready to go out on 2 ATV’s and a dog sled that was going to carry the gear and Sydney and me. A man named Jonah was going to be one of our guides; he was going to be driving an ATV with Dad and a trailer behind to carry gear. The other man was a guy named Steve and he was driving the ATV with mom on the back and a dog sled behind him with us in it and some more gear. There was also Jonahs’ dog: Princes 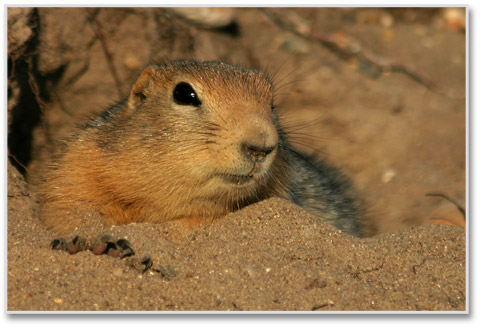 We started out great and had fun on the sled and ATV’s but then we stopped. Jonah’s trailer had blown a tire and no matter what they had tried they couldn’t fix it. We ended up leaving it there and going on. Jonah and Steve would go back later and get it.

Out in the field, after we had gotten past a bunch of bumpy terrain, we got onto Gravel and moss terrain. Princess was running along until she saw a sik-sik (Arctic Ground Squirrel) and she darted after it. It put up a fight, b 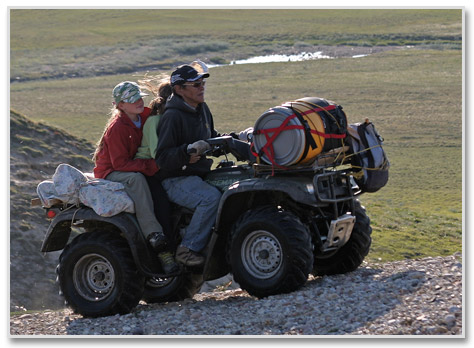 ut Princess claimed her prize and cracked every bone in its body.

We almost made it to Brock Canyons, but we were getting tired, so we stopped early, made supper, went to bed, and Jonah and Steve went back for the trailer.