With our aborted flight to Rankin, we are now unexpectedly back in Iqaluit for a few more days until the next ride out. Some conversing with Graham at Arctic Kingdom leads to a great way to spend a day… kayaking on Frobisher Bay.

A gorgeous Sunday morning greets Ryan and I as we head to the edge of the water and prepare. One of Graham’s guides Russell will be out with us. I’ve done a lot of canoeing over the years, but have never kayaked on the ocean before. I welcome Russell’s expertise, especially considering we’ll have to deal with the 2nd highest tides in the world!

By the time we finish preparations and filming an opening sequence, the ocean has risen dramatically and saves us the trouble of having to carry the kayaks very far to the water. Nestled into the tandem with Ryan in the front, I take my first strokes and we propel out into the vast bay.

After a half an hour we pass by the huge oil tanker near the causeway that is filling up the town’s tanks. It’s been there for longer than usual, likely because the ice caused delays in the hooking up process. Looking up at it from my seat low in the water I feel dwarfed.

A little further and we round the point, where we start to lose sight of town. It feels great to explore some new territory, and see some of the Baffin Island’s wilder side.

After seven kilometres of paddling past shorelines encrusted with ice we find ourselves surrounded by ice chunks in every direction. Soon, we can go no further. The sound of ice cracking, pushing and scraping against itself fills the air, and we sit quietly to experience it all. We are near an island now, so we pull up and I look around for possible painting angles. By the time I return to the kayaks, I find them sitting high and dry from the quickly lowering tide. I grab my gear, hike back to a nice view I found partway down the island, and start painting.

Watching the clock, I cover my canvas quickly. It will be getting dark soon, and we have a ways to paddle back yet. I paint until the sun almost sets, pack up and as I paddle once more, notice that the ocean has dropped another 10 plus feet. Large ice chunks that we paddled through earlier are now sitting atop newly visible rock islands. Just incredible.

Our route back looks completely different, and in some spots, extremely shallow. In the oncoming dusk, we find ourselves touching the bottom at times, and hoping we won’t grind to a halt and have to re-route around a large island. We make it through to find that the wind has picked up. We are now approaching the exposed point, and the waves are getting higher. Though harder to paddle in, this wind is actually a help, as it sends the waves crashing into barely exposed rocks, helping us to see them in the fading light. We round the bend and find the big tanker once again pumping away. Paddling close to it we find shelter from the wind for a while. The town in now lit up – it’s almost midnight – and we push on for the last stretch against a biting cross-wind that is burning up my shoulders. A shallow re-entry due to the low tide finds us picking our way through more rocks until we can go no further. But that’s ok, because we’ve made it back… and it was a great day. 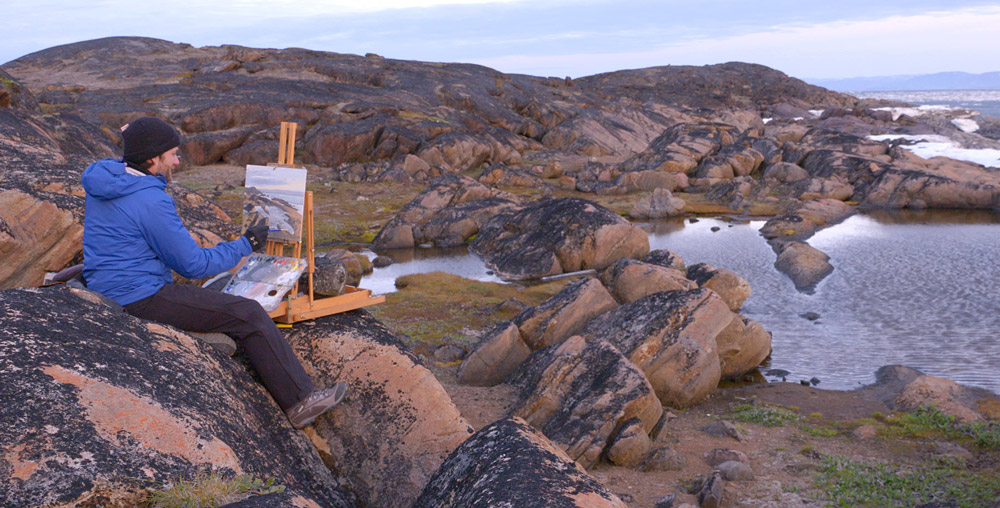