Posted at 12:00h in Blogs Only by oils@trepanieroriginals.com 0 Comments
0 Likes
Share

I’m sitting in Inuvik. It’s 12am and I’ve come across Canada to the staging place of my 2015 Into The Arctic: The Last Chapter expedition. In a couple of days, I will board a twin otter and head further north yet to Banks Island. There, for the first leg of 2 months in the Arctic, I will canoe for 160km and explore, paint and film the remote and wild landscapes of Aulavik National Park. I, along with my brother Carl, friend Anthony, and cameraman Ryan Bray, will be the only official park visitors in the park this year. This will be a privilege. 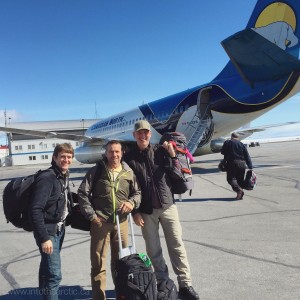 This journey actually began a few days ago on June 29th when the three of us boarded a Canadian North flight in Ottawa, stopping in at Iqaluit where brisk, near freezing winds met us as we walked across the Tarmac to await our connecting flight west. We de-planed in Yellowknife later that afternoon where hot air hit us in the face. This is really a land of extremes. The dense weather made for a beautiful evening and after a great dinner at the famed Bullocks Bistro, we hiked out back through the town and along the lakeside to our hotel room.

By 11am the next morning we were back in the air, stopping in at Norman Wells briefly on our way to Inuvik. It’s so neat to be back up here now where the project began in 2006. A cross-country road trip had brought my wife Janet and our 7 and 11 year old daughters, Andie and Sydney, here and then beyond to Paulatuk and Tuktut Nogait National Park. I followed that up with a trip to Ivvavik National Park. But some things have changed since then… Rogers cellular works here now! No more running around trying to find a pay phone. 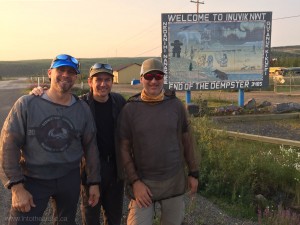 Settling in at Arctic Chalet just past the south edge of town, the 4 of us have been doing a lot of sorting and packing, and I was relieved to reconnect with the 5 boxes of gear that we shipped up to the Parks Canada office a few weeks ago. And better than all of this, we even got some work done, filming some establishing shots from around Inuvik for my next film under an endless Arctic summer sky. Soon, we’ll be heading further north to Aulavik National Park on Banks Island, that’s when the expedition gets underway on a whole new level as we leave civilization behind completely and enter into the remote wilderness of the Arctic for 2 weeks. I can’t wait.