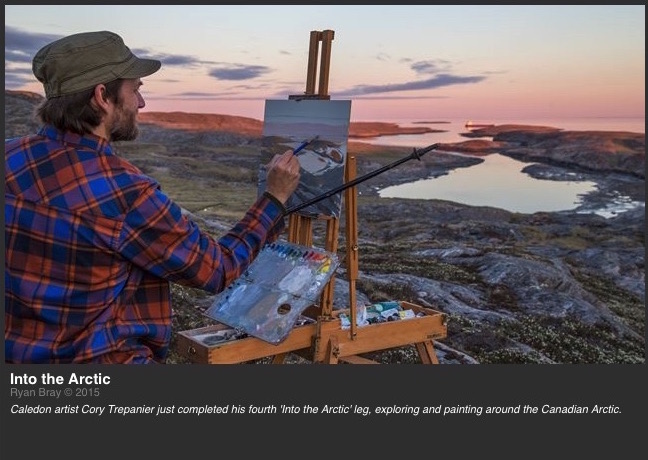 Posted at 16:33h in Media by oils@trepanieroriginals.com 0 Comments
0 Likes
Share

For Cory Trepanier, ‘true north strong and free’ is a statement that he has lived and breathed for the past decade, planning and executing journeys to the far north reaches of the nation in order to explore and paint all seven Canadian Arctic national parks.

The Caledon resident and artist recently returned from his fourth and final expedition to round out his “Into The Arctic” adventures.

Originally Trepanier said the plan was to do three journeys, but when he took a look at a map, he realized there was a big hole in the middle of the Arctic that had yet to be explored.

He had originally planned to explore Aulavik and Ukkusiksalik in order to hit all seven Arctic National Parks in Canada but due to weather restrictions, after nearly two weeks of waiting around hoping for ice to melt, Trepanier and his team had to march on and skip Ukkusiksalik.

Joined by his brother and videographer/photographer extraordinaire, Trepanier canoed the Thomsen River, explored the North Pole, saw the largest Muskox population on the planet, had a close encounter with arctic wolves, and became embedded in some of the rich history of arctic explorers of centuries past.

“We ended up at this little stone house which was built by John Ray in 1850, an early explorer who adapted the ways of the Inuit and I felt so lucky,” he said. “You’re aware the whole time that very few people have been there, let alone painted so I did a painting there.”

Other historical highlights that will be turned to beautiful canvas works of art included exploring the same islands as whalers from the early 1900s and painting in the exact same place as Group of Seven artist, A.Y. Jackson.

“As an artist, taking in landscape and art history in such a remote environment is amazing and those historical connections will be factoring into the next film in a big way,” he said.

Trepanier already has films from past journey’s that have been featured both nationally and internationally on mainstream media such as CBC and Bravo.

Along with hours of video footage, Trepanier has already completed 50 paintings from his first three legs and says now that his final leg is completed, art enthusiasts can expect to see 25 more pieces added to that collection which is set to go on an official tour across the United States in 2017.

He will spend all of his time until then completing the additional 25 paintings from a number of sketches and small paintings he completed while on the road, as well as getting started on his newest film.

The touring exhibit about the Canadian Arctic has yet to be picked up by any Canadian museums but will be making its way through places like Arizona and Michigan, and maybe even to a surprise overseas location.

For now, if you would like to meet Trepanier or see some of his pieces from his arctic adventures, he is opening his Gore Road studio up to the public for the next few Saturdays from 10 a.m. to 5 p.m. Anyone who stops by will have the privilege of seeing 25 minutes of clips from his most recent trip.

The studio is located at 16662 The Gore Rd. in Caledon, and more info about Cory, his work, or his arctic adventures can be seen at www.trepanieroriginals.com