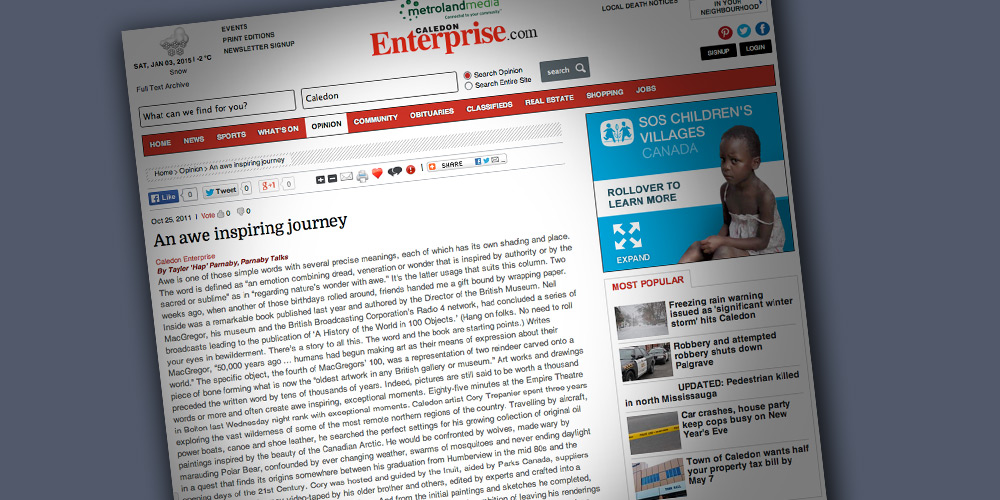 Read on Caledon Enterprise website online or read below:

By Tayler ‘Hap’ Parnaby, Parnaby Talks
Awe is one of those simple words with several precise meanings, each of which has its own shading and place. The word is defined as “an emotion combining dread, veneration or wonder that is inspired by authority or by the sacred or sublime” as in “regarding nature’s wonder with awe.” It’s the latter usage that suits this column. Two weeks ago, when another of those birthdays rolled around, friends handed me a gift bound by wrapping paper. Inside was a remarkable book published last year and authored by the Director of the British Museum. Neil MacGregor, his museum and the British Broadcasting Corporation’s Radio 4 network, had concluded a series of broadcasts leading to the publication of ‘A History of the World in 100 Objects.’ (Hang on folks. No need to roll your eyes in bewilderment. There’s a story to all this. The word and the book are starting points.) Writes MacGregor, “50,000 years ago … humans had begun making art as their means of expression about their world.” The specific object, the fourth of MacGregors’ 100, was a representation of two reindeer carved onto a piece of bone forming what is now the “oldest artwork in any British gallery or museum.” Art works and drawings preceded the written word by tens of thousands of years. Indeed, pictures are still said to be worth a thousand words or more and often create awe inspiring, exceptional moments. Eighty-five minutes at the Empire Theatre in Bolton last Wednesday night rank with exceptional moments. Caledon artist Cory Trepanier spent three years exploring the vast wilderness of some of the most remote northern regions of the country. Travelling by aircraft, power boats, canoe and shoe leather, he searched the perfect settings for his growing collection of original oil paintings inspired by the beauty of the Canadian Arctic. He would be confronted by wolves, made wary by marauding Polar Bear, confounded by ever changing weather, swarms of mosquitoes and never ending daylight in a quest that finds its origins somewhere between his graduation from Humberview in the mid 80s and the opening days of the 21st Century. Cory was hosted and guided by the Inuit, aided by Parks Canada, suppliers and supporters, his journey video-taped by his older brother and others, edited by experts and crafted into a brilliant motion picture which leaves you breathless. And from the initial paintings and sketches he completed, some under even harrowing circumstances, Trepanier has added to an artistic ambition of leaving his renderings of the magnificence of the Canadian north, its towering peaks, its vast, ancient sheets of glacial ice, its deep fiords, open Arctic waters and vacant vistas for posterity. It seemed so strange how the ideas of Neil MacGregor’s ‘History of the World in 100 Objects’ and Cory Trepanier’s motion picture ‘Into the Arctic II’ converged. The carving of the two reindeer into ancient bone told a story about a world we shall never know. The vast majority of Canadians will never see or feel the visions of the vast Canadian north. Cory Trepanier’s artwork takes you there and leaves you in awe. ‘Into the Arctic II’ is available on DVD at www.trepanierstore.com