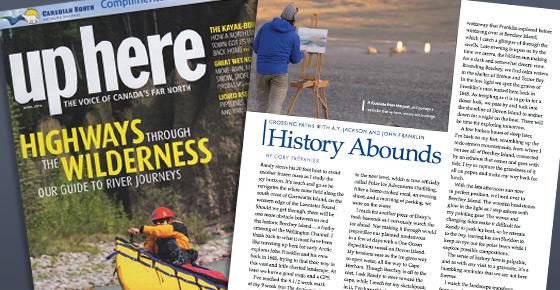 Cory’s Into The Arctic: The Last Chapter expedition field journals were published as a series in Canadian North airline’s Up Here Magazine beginning in November 2015. Here is part 6. Published in the April 2016 issue.

Randy steers his 20 foot boat to avoid another frozen mass as I study the icy horizon. It’s touch and go as he navigates the white mine field along the south coast of Cornwallis Island, on the western edge of the Lancaster Sound. Should we get through, there will be one more obstacle between us and the historic Beechey Island… a frothy crossing of the Wellington Channel. I think back to what it must have been like traveling up here for early Arctic explorer John Franklin and his crew back in 1845, trying to find their way in this vast and little chartered landscape. At least we have a good map, and a GPS.

I’ve reached the 6 1/2 week mark of my 9 week Into The Arctic painting expedition, and I’m eager for this next leg of my travels that will bring me face to face with rich Canadian art and exploration history.

It began with a warm welcome from Randy Nungaq and his wife Daisy after stepping off the plane into a sun-drenched Resolute Bay. Months earlier we had connected through the local Hunters and Trappers Committee in my search for an outfitter with a boat. They recommended Randy for his years of experience on the land, and because he was in the process of taking his business to the next level, which is now officially called Polar Ice Adventures Outfitting. After a home-cooked meal, an evening shoot, and a morning of packing, we were on the water.

I reach for another piece of Daisy’s fresh bannock as I nervously watch the ice ahead. Not making it through would jeopardize our planned rendezvous in a few of days with a One Ocean Expeditions vessel on Devon Island. My tensions ease as the ice gives way to open water, all the way to Cape Hotham. Though Beechey is off to the east, I ask Randy to steer toward the cape, while I reach for my sketchbook. In it, I’ve brought along a copy of a drawing from 1930 by one of the key members of the Group of Seven, A.Y. Jackson, who traveled these far reaches with Frederic Banting. Now I’m here, with his sketch in front of me and Hotham in the background, studying Arctic art history firsthand like few have ever done before. I enjoy the moment until I notice a beautiful small iceberg coming into view in the rocking seas. Contrasting beautifully with the distant cape, I realize it’s time for me to flip the page and make my own marks.

Spray hits me in the face as we cross Wellington Channel. This is the waterway that Franklin explored before wintering over at Beechey Island, which I catch a glimpse of through the swells. Late evening is upon us by the time we arrive, the hidden sun making for a dark and somewhat dreary view. Rounding Beechey, we find calm waters in the shelter of Erebus and Terror Bay. In the low light we spot the graves of Franklin’s men buried here back in 1845. As tempting as it is to go in for a closer look, we pass by and tuck into the shoreline of Devon Island to anchor down for a night on the boat. There will be time for exploring tomorrow.

A few broken hours of sleep later, I’m back on my feet, scrambling up the rock-strewn mountainside, from where I can see all of Beechey Island, connected by an isthmus that comes and goes with tide. I try to capture the grandness of it all on paper, and make my way back for lunch.

With the late afternoon sun now in perfect position, we head over to Beechey Island. The wooden headstones glow in the light as I step ashore with my painting gear. The waves and changing tides make it difficult for Randy to park his boat, so he retreats to the bay, leaving his son Sheldon to keep an eye out for polar bears while I explore possible compositions.

The sense of history here is palpable, and as with any visit to a gravesite, it’s a humbling reminder that we are not here forever.

I watch the landscape transform from grey-browns to rich orange-ochre hues. I set my easel, and despite my fascination with the past, I find myself caught up in the present, and the beauty of nature before me. Yes, the graves are in my composition, but they are small and glowing in the corner, dwarfed by the immensity of the Arctic around it. A footnote from the past, and perhaps a reminder that up here, we are not in charge.