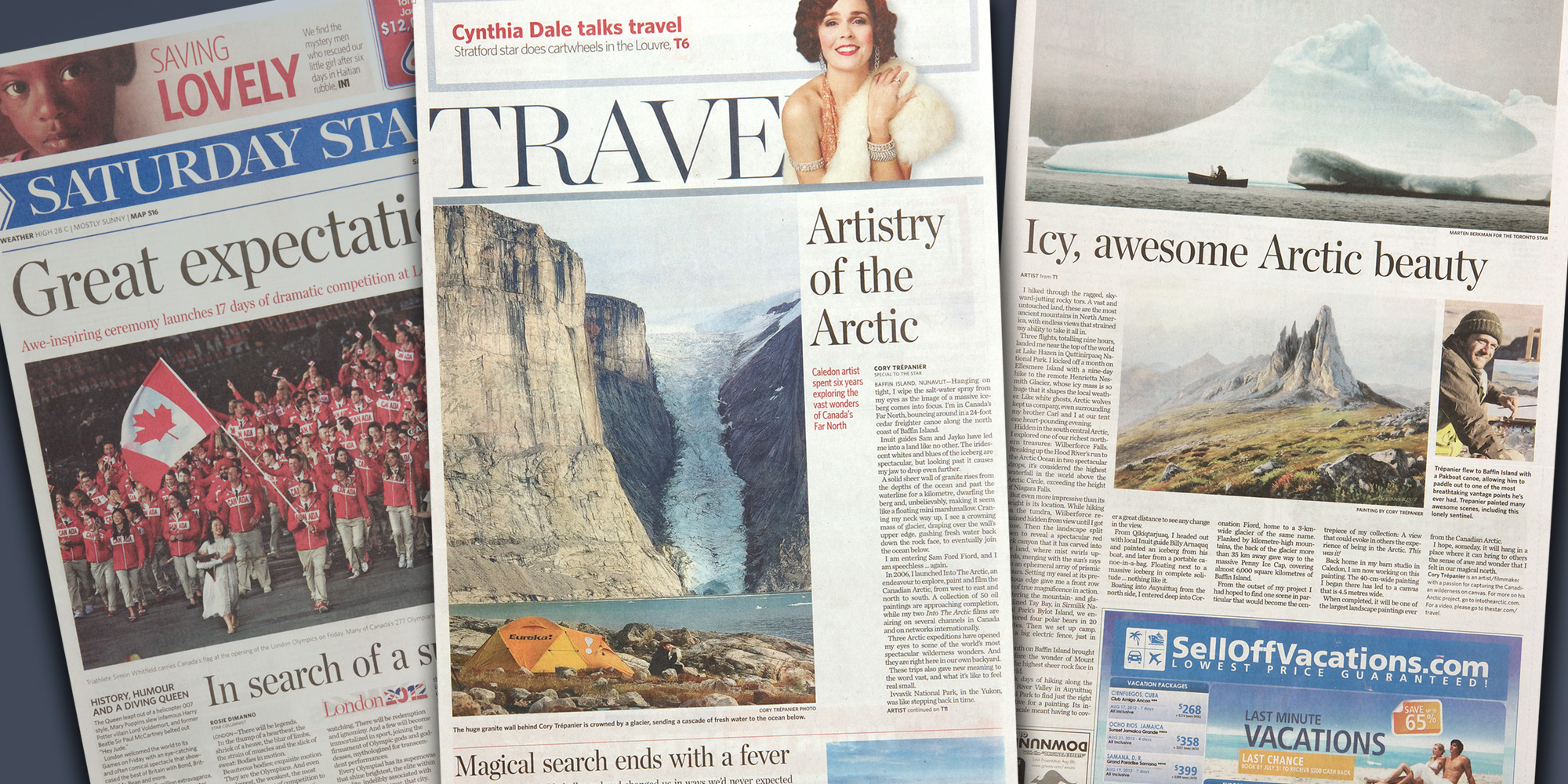 The Toronto Star invited Cory to write a feature article for the front page of their Travel section to share about his Arctic painting expeditions.

Three Arctic expeditions opened Cory Trépanier’s eyes to some of the world’s most spectacular wilderness wonders — right here in our own backyard.

By: Cory Trépanier Special to the Star, Published on Thu Jul 26 2012

BAFFIN ISLAND, NUNAVUT—Hanging on tight, I wipe the salt-water spray from my eyes as the image of a massive iceberg comes into focus. I’m in Canada’s Far North, bouncing around in a 24-foot cedar freighter canoe along the north coast of Baffin Island.

Inuit guides Sam and Jayko have led me into a land like no other. The iridescent whites and blues of the iceberg are spectacular, but looking past it causes my jaw to drop even further. A solid sheer wall of granite rises from the depths of the ocean and past the waterline for a kilometre, dwarfing the berg and, unbelievably, making it seem like a floating mini marshmallow.

Craning my neck way up, I see a crowning mass of glacier, draping over the wall’s upper edge, gushing fresh water back down the rock face, to eventually join the ocean below.

I am entering Sam Ford Fiord, and I am speechless … again.

In 2006, I launched Into The Arctic, an endeavour to explore, paint and film the Canadian Arctic, from west to east and north to south. A collection of 50 oil paintings are approaching completion, while my two Into The Arctic films are airing on several channels in Canada, including CBC Doc and HIFI, and on networks internationally.

Three Arctic expeditions have opened my eyes to some of the world’s most spectacular wilderness wonders. And they are right here in our own backyard. These trips also gave new meaning to the word vast, and what it’s like to feel real small.

• Ivvavik National Park, in the northwest corner of the Yukon, was like stepping back in time as I hiked through the ragged, skyward-jutting rocky tors. A vast and untouched land, these are the most ancient mountains in North America, with endless views that strained my ability to take it all in.

• Three flights, totalling nine hours, landed me near the top of the world at Lake Hazen in Quttinirpaaq National Park. I kicked off a month on Ellesmere Island with a nine-day hike to the remote Henrietta Nesmith Glacier, whose icy mass is so huge that it shapes the local weather. Like white ghosts, Arctic Wolves kept us company, even surrounding my brother Carl and I at our tent one heart-pounding evening.

• Hidden in the south central Arctic, I explored one of our richest northern treasures: Wilberforce Falls. Breaking up the Hood River’s run to the Arctic Ocean in two spectacular drops, it’s considered the highest waterfall in the world above the Arctic Circle, exceeding the height of Niagara Falls.

But even more impressive than its height, is its location. While hiking on the tundra, Wilberforce remained hidden from view until I got close. Then, the landscape split open to reveal a spectacular red rock canyon that it has carved into the land, where mist swirls upwards, merging with the sun’s rays into an ephemeral array of prismic colours. Setting my easel at its precipitous edge gave me a front row view of true magnificence in action.

• Entering the mountain- and glacier-lined Tay Bay, in Sirmilik National Park’s Bylot Island, we encountered four polar bears in 20 minutes. Then we set up camp. With a big electric fence, just in case.

• A month on Baffin Island brought me before the wonder of Mount Thor, the highest sheer rock face in the world. It took days of hiking along the Weasel River Valley in Auyuittuq National Park to find just the right perspective for a painting. Its incredible scale meant having to cover a great distance to see any change in the view.

From Qikiqtarjuaq, I headed out with local Inuit guide Billy Arnaquq and painted an iceberg from his boat, and later from a portable canoe-in-a-bag. Floating next to a massive iceberg in complete solitude … nothing like it.

Boating into Auyuittuq from the north side, I entered deep into Coronation Fiord, home to a 3-km-wide glacier by the same name. Flanked by kilometre-high mountains, the back of the glacier, more than 35 km away, gave way to the massive Penny Ice Cap, covering almost 6,000 square kilometers of Baffin Island.

From the outset of my project, I had hoped to find one scene in particular that would become the centrepiece of my collection. A view that could evoke in others the experience of being in the Arctic. This was it!

Back home in my barn studio in Caledon, I am now working on this painting. The 40-cm-wide painting I began there has led to a canvas that is 4.5 metres wide. When completed, it will be one of the largest landscape paintings ever from the Canadian Arctic.

I hope, someday, it will hang in a place where it can bring to others the sense of awe and wonder that I felt in our magical North.

Cory Trépanier is an artist/filmmaker with a passion for capturing the Canadian wilderness on canvas. For more on his Arctic project, go to intothearctic.com.