Today we woke in the parking place we got at the RV place in Dawson city. When Mom went to get her laundry done there, she met a nice lady named Joan who said would tell us if the “gold” we got was real or not.

Dad went with us to see the result. She panned through it all and it happened to be mostly mica, a substance that looked like gold, but quickly and easily dissolves and breaks.

In the end, we got one small piece of gold. We thanked her very much for also giving Syd a little piece of her own gold, which was the only piece she found in the Yukon panning competition. We hurried back to show Mom the gold.

We also met another lady named Tina in the laundromat, and when she heard us talking about the gold, she said that her boy friend, Alfredo, is a gold miner and he could show us his gold in the truck ( he was filling up with gas).

When he came back, Alfredo showed us his gold. He even gave us some nuggets to put in our vile, where I put my nugget.

Later we went into Dawson City and drove up to Dawson lookout. We could see down over all of 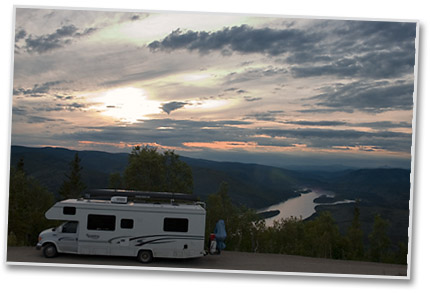 Dawson and the Yukon River. We also sat on a big bench up there that was hand carved with the words “The top of the world bench” or something like.

Within the time we spent there, a fox came along. However, instead of trailing away from the people, it went right towards them, but not us. Then, he came closer. Mom knew this was a very strange thing for a fox to do. She thought that he was rabid. Then she saw that he had quills in his chin, which belonged to a porcupine. He was very sick, the poor thing.

We went back to Dawson and got some great ice cream at “Klondike Cream and Candy.”

Then we went back home and went to sleep in the same park.