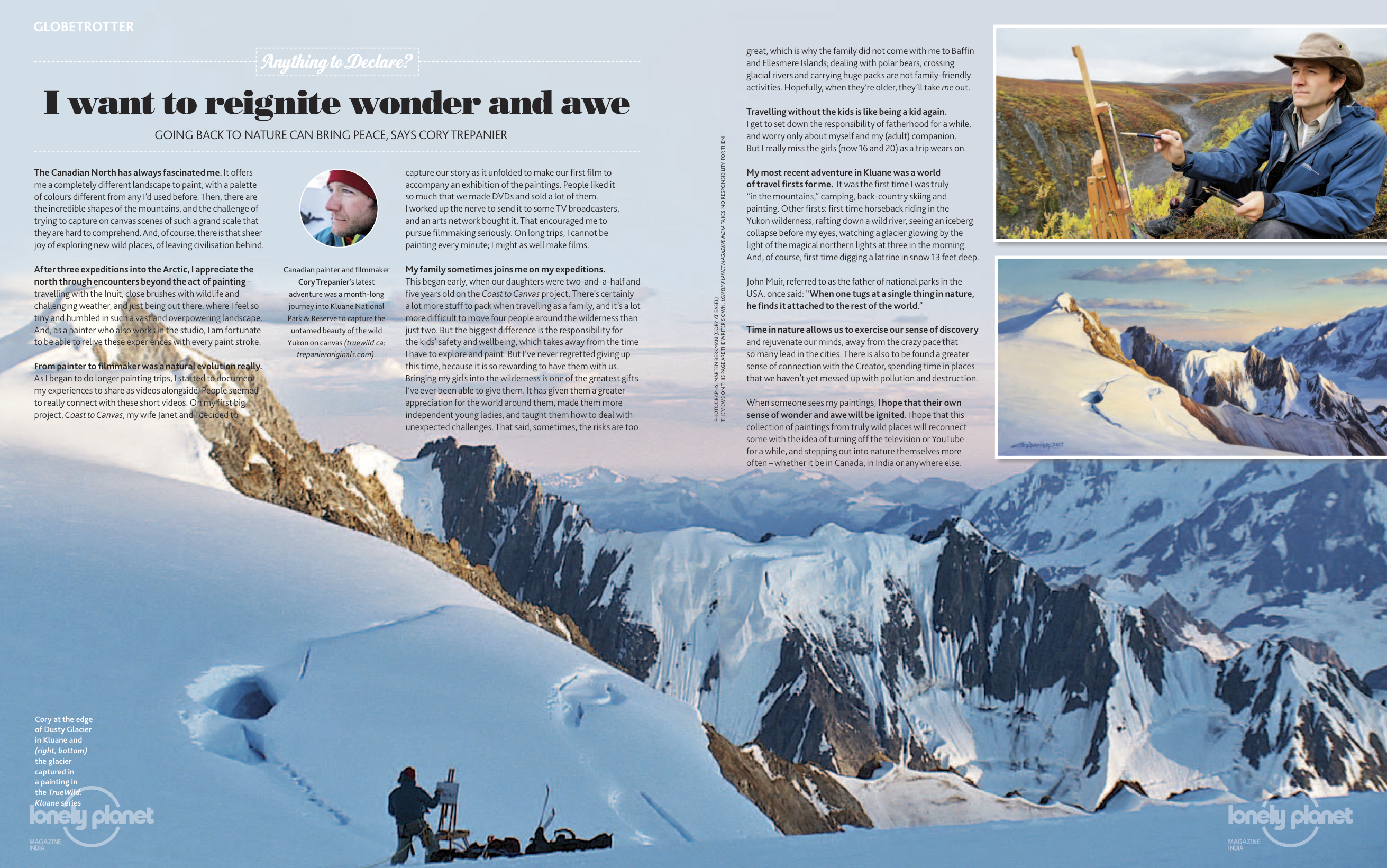 Lonely Planet India Magazine article from the August 2015 issue in GLOBETROTTER: Anything to Declare? section:

“I WANT TO REIGNITE WONDER AND AWE”

Going back to nature can bring peace, says Cory Trepanier

From an interview with Cory Trépanier

The Canadian North has always fascinated me. It offers me a completely different landscape to paint, with a palette of colours different from any I’d used before. Then, there are the incredible shapes of the mountains, and the challenge of trying to capture on canvas scenes of such a grand scale that they are hard to comprehend. And, of course, there is that sheer joy of exploring new wild places, of leaving civilisation behind.

After three expeditions into the Arctic, I appreciate the north through encounters beyond the act of painting – travelling with the Inuit, close brushes with wildlife and challenging weather, and just being out there, where I feel so tiny and humbled in such a vast and overpowering landscape. And, as a painter who also works in the studio, I am fortunate to be able to relive these experiences with every paint stroke.

From painter to filmmaker was a natural evolution really. As I began to do longer painting trips, I started to document my experiences to share as videos alongside. People seemed to really connect with these short videos. On my first big project, Coast to Canvas, my wife Janet and I decided to capture our story as it unfolded to make our first film to accompany an exhibition of the paintings. People liked it so much that we made DVDs and sold a lot of them. I worked up the nerve to send it to some TV broadcasters, and an arts network bought it. That encouraged me to pursue filmmaking seriously. On long trips, I cannot be painting every minute; I might as well make films.

My family sometimes joins me on my expeditions. This began early, when our daughters were two-and-a-half and five years old on the Coast to Canvas project. There’s certainly a lot more stuff to pack when travelling as a family, and it’s a lot more difficult to move four people around the wilderness than just two. But the biggest difference is the responsibility for the kids’ safety and wellbeing, which takes away from the time I have to explore and paint. But I’ve never regretted giving up this time, because it is so rewarding to have them with us. Bringing my girls into the wilderness is one of the greatest gifts I’ve ever been able to give them. It has given them a greater appreciation for the world around them, made them more independent young ladies, and taught them how to deal with unexpected challenges. That said, sometimes, the risks are too great, which is why the family did not come with me to Baffin and Ellesmere Islands; dealing with polar bears, crossing glacial rivers and carrying huge packs are not family-friendly activities. Hopefully, when they’re older, they’ll take me out.

Travelling without the kids is like being a kid again. I get to set down the responsibility of fatherhood for a while, and worry only about myself and my (adult) companion. But I really miss the girls (now 16 and 20) as a trip wears on.

My most recent adventure in Kluane was a world of travel firsts for me. It was the first time I was truly “in the mountains,” camping, back-country skiing and painting. Other firsts: first time horseback riding in the Yukon wilderness, rafting down a wild river, seeing an iceberg collapse before my eyes, watching a glacier glowing by the light of the magical northern lights at three in the morning. And, of course, first time digging a latrine in snow 13 feet deep. John Muir, referred to as the father of national parks in the USA, once said: “When one tugs at a single thing in nature, he finds it attached to the rest of the world.”

Time in nature allows us to exercise our sense of discovery and rejuvenate our minds, away from the crazy pace that so many lead in the cities. There is also to be found a greater sense of connection with the Creator, spending time in places that we haven’t yet messed up with pollution and destruction.

When someone sees my paintings, I hope that their own sense of wonder and awe will be ignited. I hope that this collection of paintings from truly wild places will reconnect some with the idea of turning off the television or YouTube for a while, and stepping out into nature themselves more often – whether it be in Canada, in India or anywhere else.