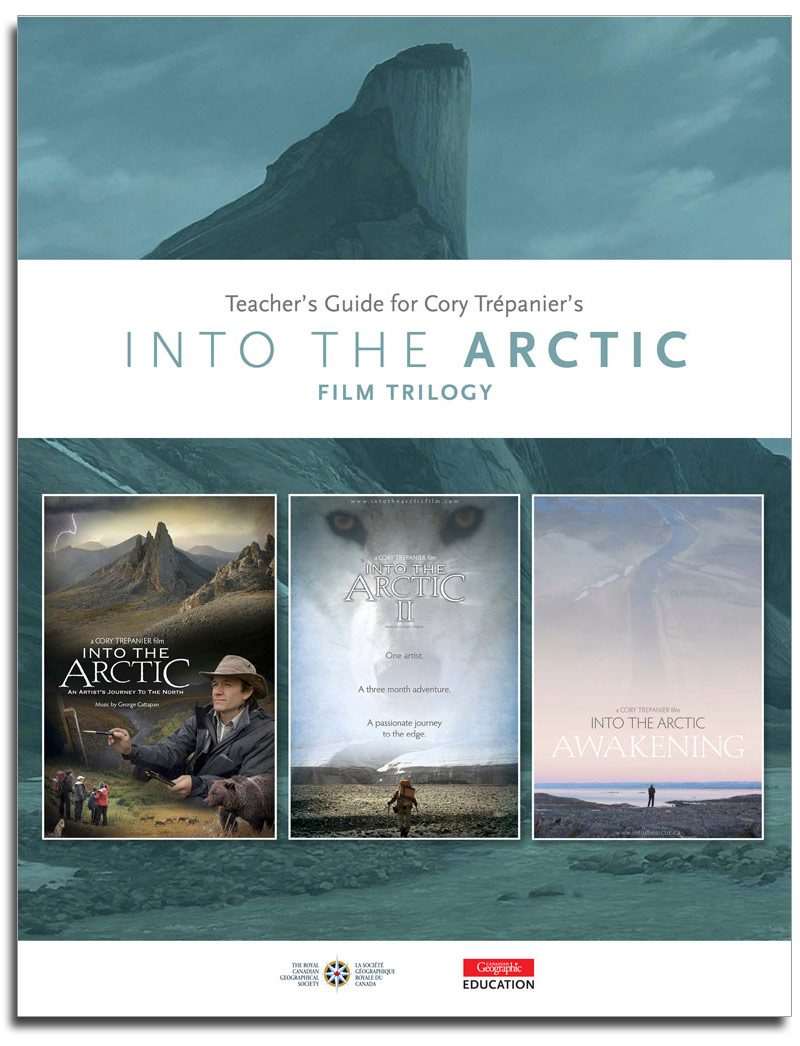 Into The Arctic is a comprehensive teacher’s guide created in partnership with Canadian Geographic Education. Featuring seven learning modules focused on the geography of Canada’s north, it has been developed from Trépanier’s Into the Arctic film trilogy, travels and stunning paintings. Available for grades K-12, the resource package covers a range of subjects and topics from Arctic exploration, Indigenous culture, visual art, climate change, wildlife, and more. Teachers can also use this resource to help students develop critical thinking, planning, and navigation skills through fieldwork activities and creative projects.

The Into the Arctic film series can be screened in its entirety or based on subject and theme. Information is provided below to access the full-length films and over 70 short video clips edited from the films to accompany the subject modules.

ATTENTION EDUCATORS:
Sign up with Can Geo Education here to receive access and updates as more is added to the resource in the months to come!

Already signed up? Get it all right here.

My search for artistic inspiration first led me to Canada’s North in 2006.

As a landscape painter and filmmaker, images of epic mountains, vast tundra, and wild rivers had been teasing my imagination for years. It was time to experience this land for myself and create some new canvases.

That began a journey that has been ongoing ever since.

Five expeditions have led me to the Canadian Arctic’s most remote corners: from Ellesmere Island to Bathurst Inlet and from the northwest corner of the Yukon to Baffin Island. I travelled through 16 Arctic communities and countless places in-between. In total, these experiences have led to over 100 oil paintings and 3 documentaries.

These films and over 50 canvases are now sharing the wonders of the North with the public as the INTO THE ARCTIC Exhibition Tour. Visiting 12 museums over 4 years, it features a 15 foot wide painting entitled Great Glacier.

Beyond all this, these journeys have offered me an education about the North surpassing anything I imagined.

Whether through exploring the land with Inuit elders, coming face-to-face with Arctic wolves,  visiting remnants from past explorers or encountering human history in remote indigenous Thule sites; the ways in which my life have been enriched are countless.

Sharing these experiences are at the heart of our films, telling stories that often reach beyond my canvases. Over the years, it has been rewarding to hear how others — having seen them on television, streaming or in a theatre — have been moved by the North. At the same time, it was an unexpected revelation to hear that educators were starting to enthusiastically use “Into the Arctic” in their classrooms.

This discovery has been the motivational force behind the creation of this new film-based curriculum with Canadian Geographic Education. A free tool for educators and students to embark on their own journeys of Arctic learning and inspiration.

Now more than ever, as the Arctic is facing a rapidly changing climate and pressure from around the globe, it is my sincere hope that this curriculum — and the many ways it will be used — will help inspire an Arctic awakening in the years to come.