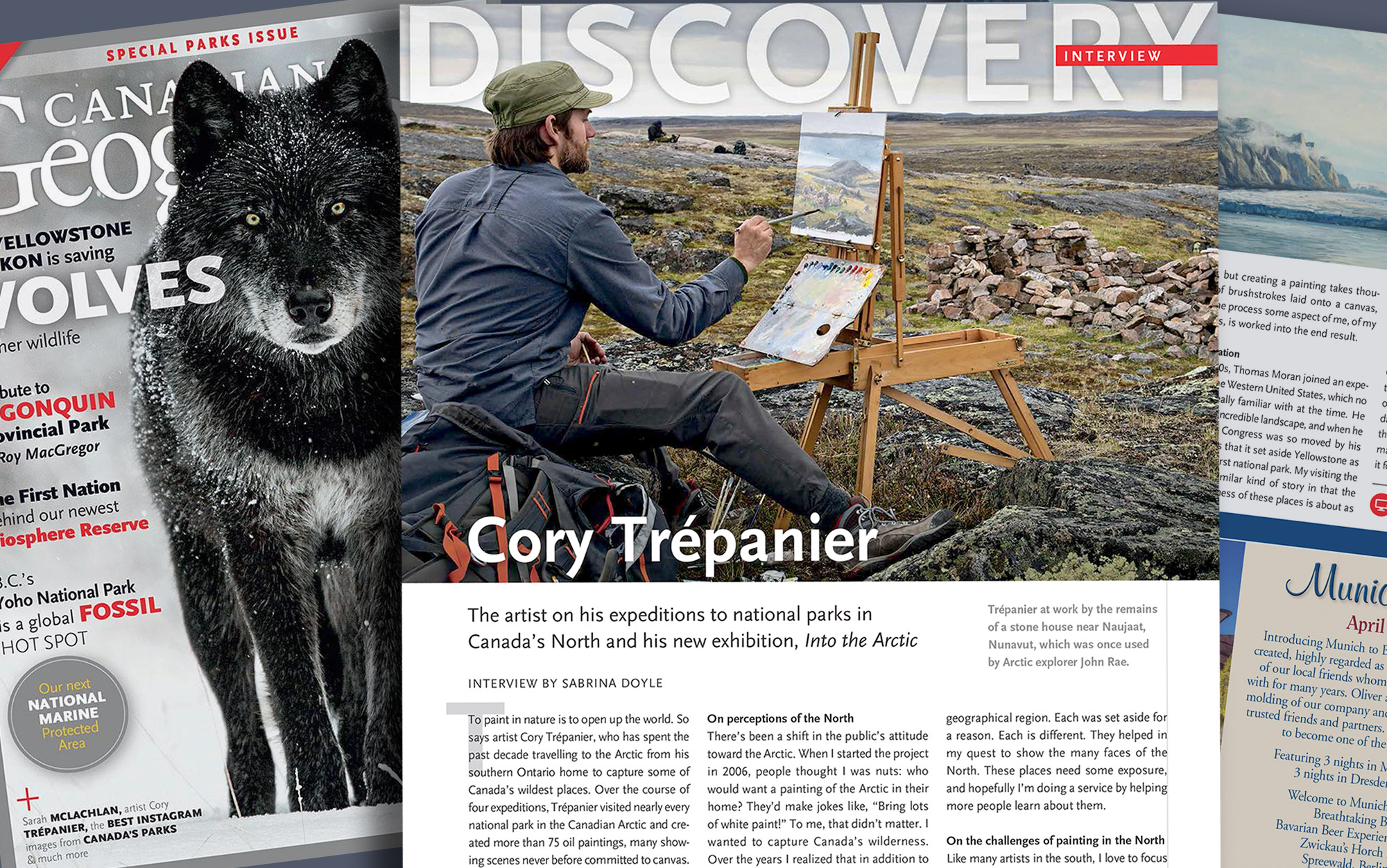 The artist on his expeditions to national parks in Canada’s North and his new exhibition, Into The Arctic

To paint in nature is to open up the world. So

says artist Cory Trépanier, who has spent the past decade travelling to the Arctic from his southern Ontario home to capture some of Canada’s wildest places. Over the course of four expeditions, Trépanier visited nearly every national park in the Canadian Arctic and cre- ated more than 75 oil paintings, many show- ing scenes never before committed to canvas. To document the expeditions, Trépanier cre- ated the Into the Arctic lm trilogy, the last of which will be released later this year.

Highlights from Trépanier’s Arctic paint- ings have been gathered into a travelling exhi- bition, also called Into the Arctic, which premiered in January at the Canadian Embassy in Washington, D.C., and will tour the United States until 2019. No Canadian museums are currently set to host the works, but Trépanier hopes to eventually bring the tour home. Here, he talks about his Arctic experiences.

On perceptions of the North

There’s been a shift in the public’s attitude toward the Arctic. When I started the project in 2006, people thought I was nuts: who would want a painting of the Arctic in their home? They’d make jokes like, “Bring lots of white paint!” To me, that didn’t matter. I wanted to capture Canada’s wilderness. Over the years I realized that in addition to scratching my own itch, the project was also serving to connect people to the Arctic in a way I hadn’t anticipated when I started.

On the importance of national parks

The parks are the subject of 65 to 70 per cent of my work. When you want to go North you have to deal with questions like, “Well, how do I get there?” The parks offered a more realistic avenue for accessing some of the North. But on top of that, each represents a different geological and geographical region. Each was set aside for a reason. Each is different. They helped in my quest to show the many faces of the North. These places need some exposure, and hopefully I’m doing a service by helping more people learn about them.

On the challenges of painting in the North

Like many artists in the south, I love to focus on sunrise and sunset because of the great light, but all of a sudden I was in a place where the sun never set for a month. Below the freez- ing mark, paints will stiffen, but I usually stiffen up even more quickly, so as long as I’m still moving the paints are usually good to go. On Ellesmere Island, the wind was howling and sand kept blowing into my paint, which provided a nice kind of texture but not quite what I was looking for. And then there are the bugs and mosquitos, which get stuck in the paint and on the painting.

You’re also not supposed to fly with oil paints, and certainly not paint thinners. So I had to ship multiple sets ahead of time and pick them up along the way.

On the power of painting

Painting, unlike other forms of imagery, adds a real, deep level of humanity. Painting takes time. These days, things are so rushed. You can take amazing pictures with your iPhone, but creating a painting takes thou- sands of brushstrokes laid onto a canvas, and in the process some aspect of me, of my emotions, is worked into the end result.

In the 1870s, Thomas Moran joined an expedition to the Western United States, which no one was really familiar with at the time. He painted an incredible landscape, and when he came back, Congress was so moved by his watercolours that it set aside Yellowstone as the world’s rst national park. My visiting the Arctic is a similar kind of story in that the public awareness of these places is about as

high as when Moran went to the United States. That path was laid before me 150 years ago, and I draw inspiration from that.

On his role as an artist

One of my greatest hopes is to inspire people through the beauty of the Arctic. There’s a lot of stuff going on in our environment these days, and my role is to bring these places onto the agenda. This is the North as I see it, and maybe this work can inspire someone to go see it for themselves.

See more paintings from Trépanier’s Into the Arctic series at cangeo.ca/jf17/trepanier.