Our map shows that the end of the Thomsen River pours into Castel Bay, then M’Clure Straight and onward to the Beaufort Sea.

It also shows that the highest point of land in the region is called Castel Bay Lookout, which would be a great place to take it all in, and likely an even better place to paint from. Unfortunately, that point is across the river and many miles away, out of our reach. If we could have gone to the 2nd pick-up location, then we would have had a good shot at it. But that’s life. 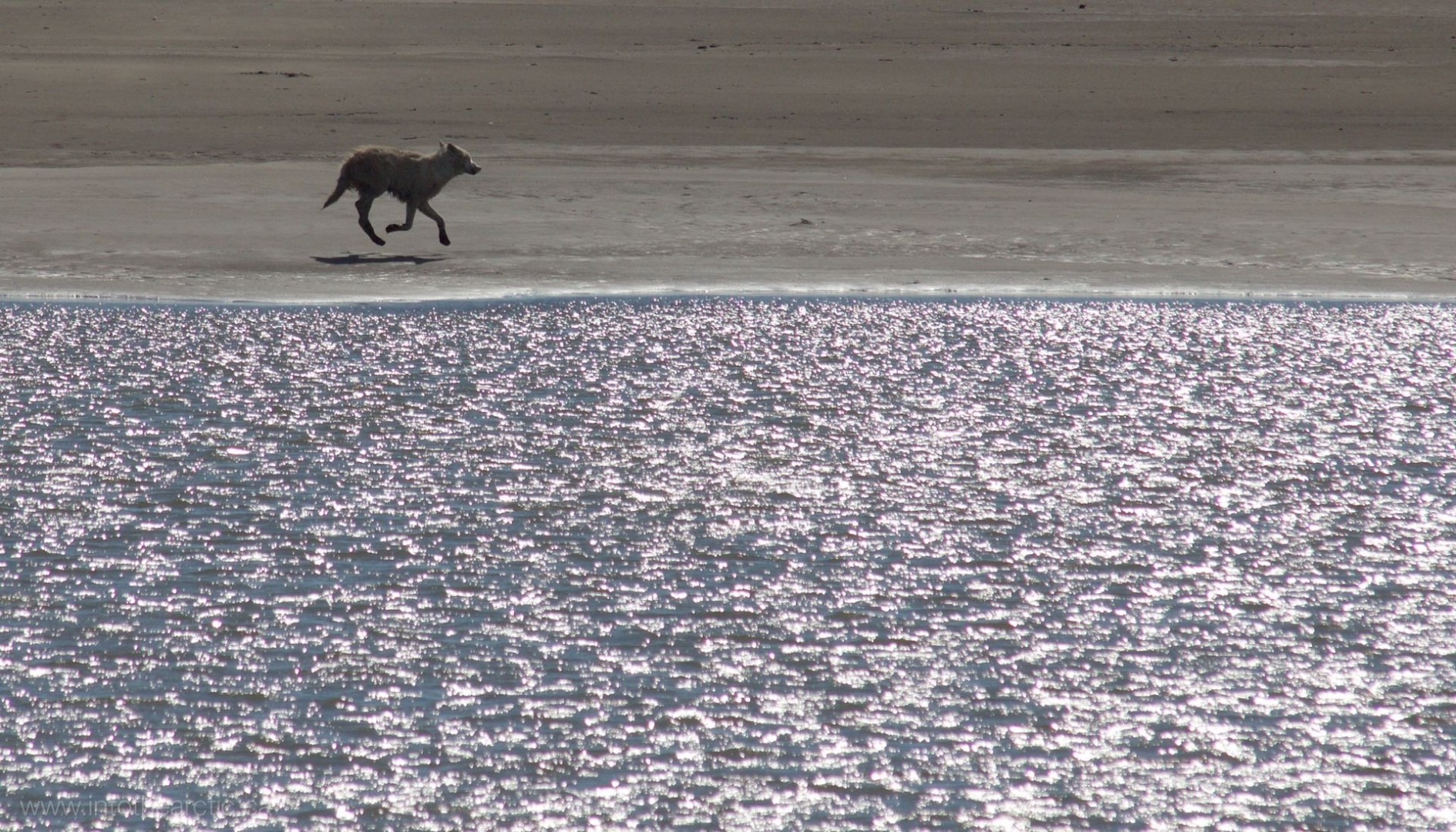 We did however find a closer high point on our side of the Thomsen that might offer up a vista as well. Today, we are going to see if we can hike up there.

Our preparations are interrupted by a lone Arctic Wolf loping along the far shoreline. All of us stop in our tracks to take it in. Though a little ways away, seeing this beautiful wild creature is always a treat. We naturally break out the cameras, film what we can and take photos. Nothing great, and it’s rather small in our viewfinders, but a nice bonus nevertheless.

What comes next is something I’ve never witnessed before. The wolf enters the water and begins to swim across the river! He disappears behind the edge of our shoreline upriver and is gone, only to re-appear a few minutes later on the tundra. He’s now on our side of the river. But that’s not enough for this curious wolf. For the next 10-15 minutes, it works its way closer and closer to camp, trying to figure out what to make of intruders in his back yard. At one point, the young canine passes a mere 15 feet way, sniffing and staring, keeping light on its feet, and then slowly wanders off into the distance. What a treat! 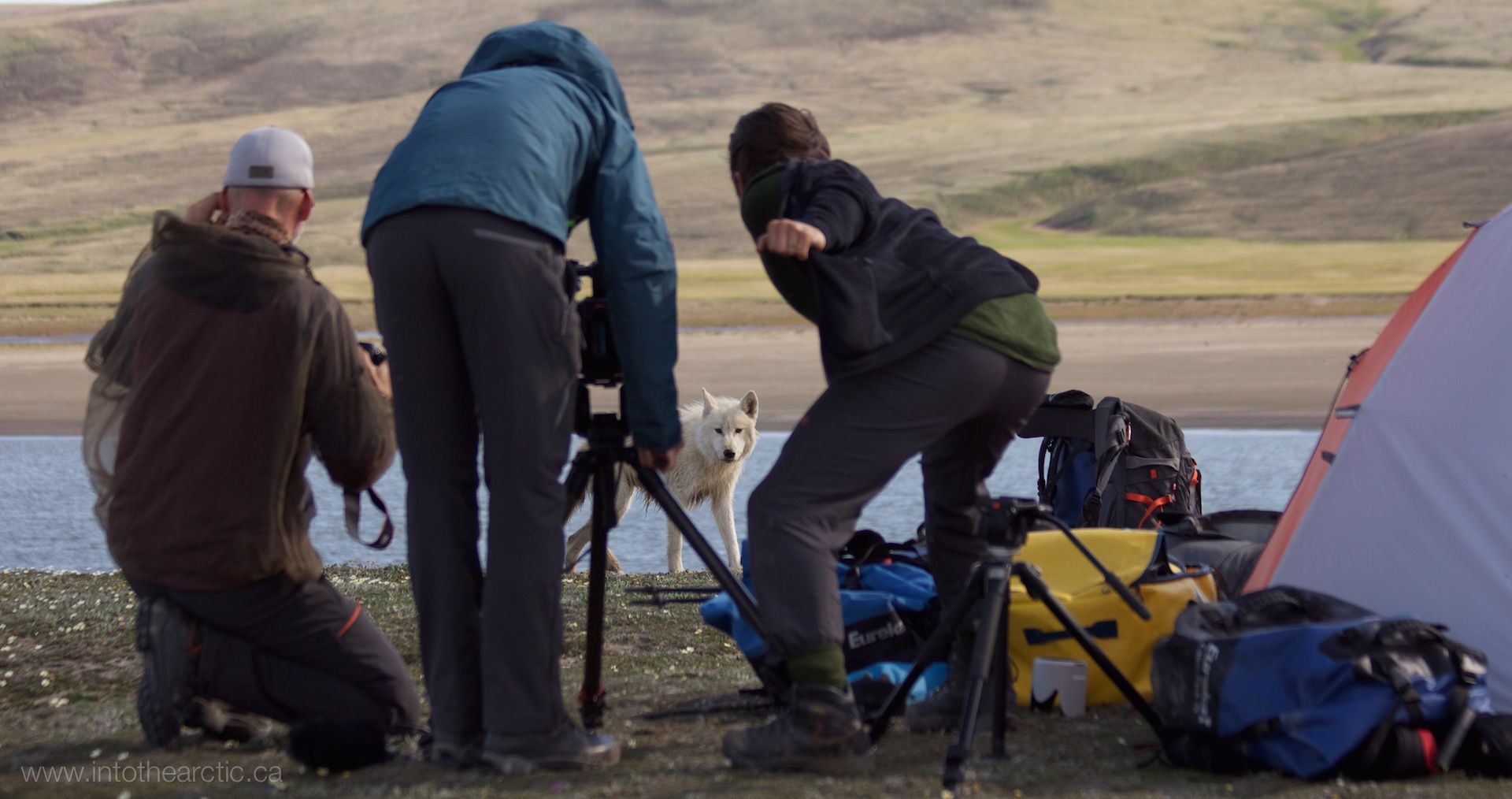 The show now over, we carry on packing for our hike. But then we notice 5 more Arctic Wolves have moved in across the river, with a herd of Muskox on the hill behind them. One of them begins to howl. The rest of the family seems to be temporarily missing a member.

Eventually, we get back to work and begin our hike, while the wolves sprawl out and snooze on the sun-warmed beach.

We film as we hike, making our progress quite slow. But I’m enjoying the views along the way. As we climb higher, we encounter a side valley drenched in sun. An Arctic fox makes an appearance just as Ryan is filming us cresting a rise, and only had to turn the camera 90 degrees to get some nice footage. And of course, the scale of the region sinks in all the more with each step upwards. 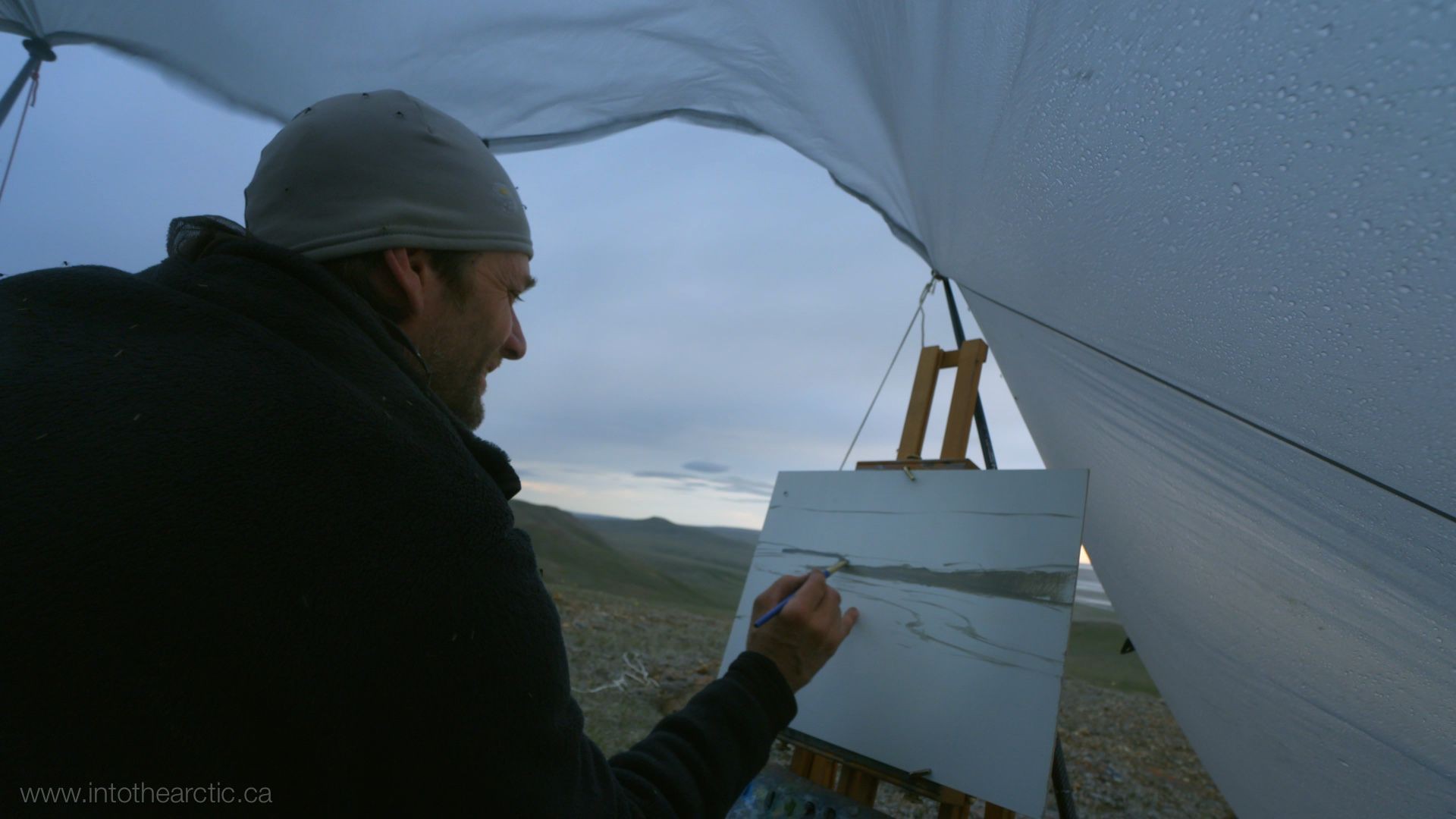 Four hours of trekking brings us close to those lines on the map that mark our destination. As we take our final steps upward, I find my reward: a spectacular expansive view of the rest of Thomsen River all the way to Castel Bay and the M’Clure Straight. What a sight! As I look to my right, I trace the river with my eyes back upriver for miles until it disappears into the landscape. Our point of departure is nowhere to be seen.

After a mountain-top dinner, Carl and Anthony being their hike back to camp. I stay with Ryan, because, though now exhausted by my really late night yesterday, I need to do something with this view.

Dark clouds move in behind us, and after a battle with the wind, rain and my flapping tarp that goes on until 2am, I wrap up a painting session and pack up my gear. Ryan begins hiking, but I delay a little longer to try and absorb the view, turn my back and begin the trek back. 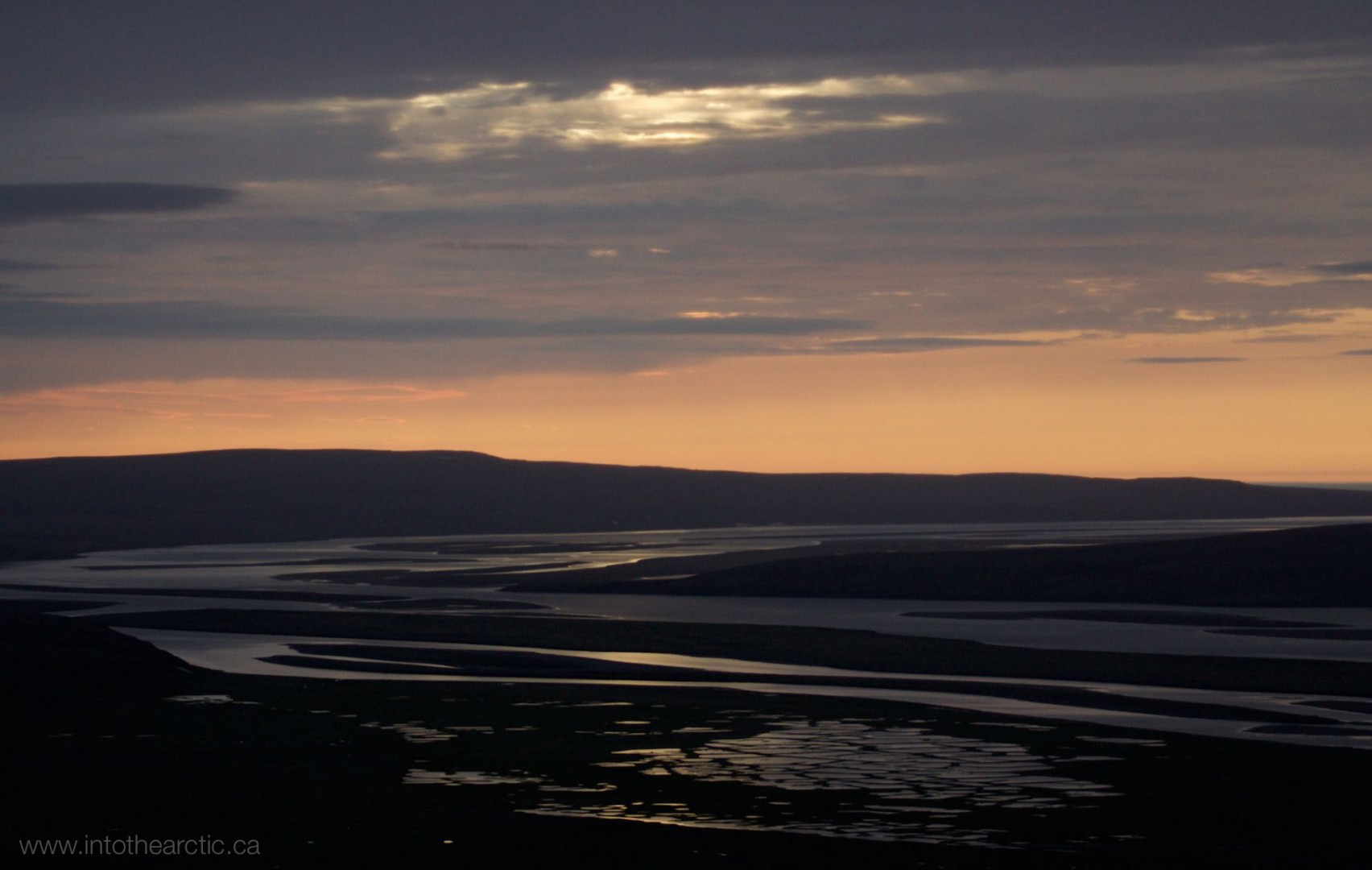