Trépanier’s oil paintings and passionate films are conceived through extensive exploration into some of the most wild places on our planet.

In 2006, Cory Trépanier set off on what would become a decade-long quest to paint, film, and explore the spectacular landscapes of the Canadian Arctic. To capture the breadth of this region, Cory Trépanier undertook four expeditions to paint the furthest reaches of the North.

With a pack full of painting, filming, and camping gear, Trépanier traversed over 40,000 kilometres, through 6 Arctic National Parks and 16 Arctic communities, and explored many more places in between. He travelled by plane, helicopter, ship, boat, canoe, and on foot, often with the Inuit, stripping back day-to-day accoutrements to the basics of hiking boots, food, and a tent, in order to immerse himself in his subject.

When completed, the INTO THE ARCTIC collection will number close to 100 oil paintings and graphite sketches and 3 documentary films.

Through the INTO THE ARCTIC art, films, media stories, online content and public speaking, Trépanier is inspiring others with the beauty of the Canadian Arctic, one of the most fragile regions of our planet. 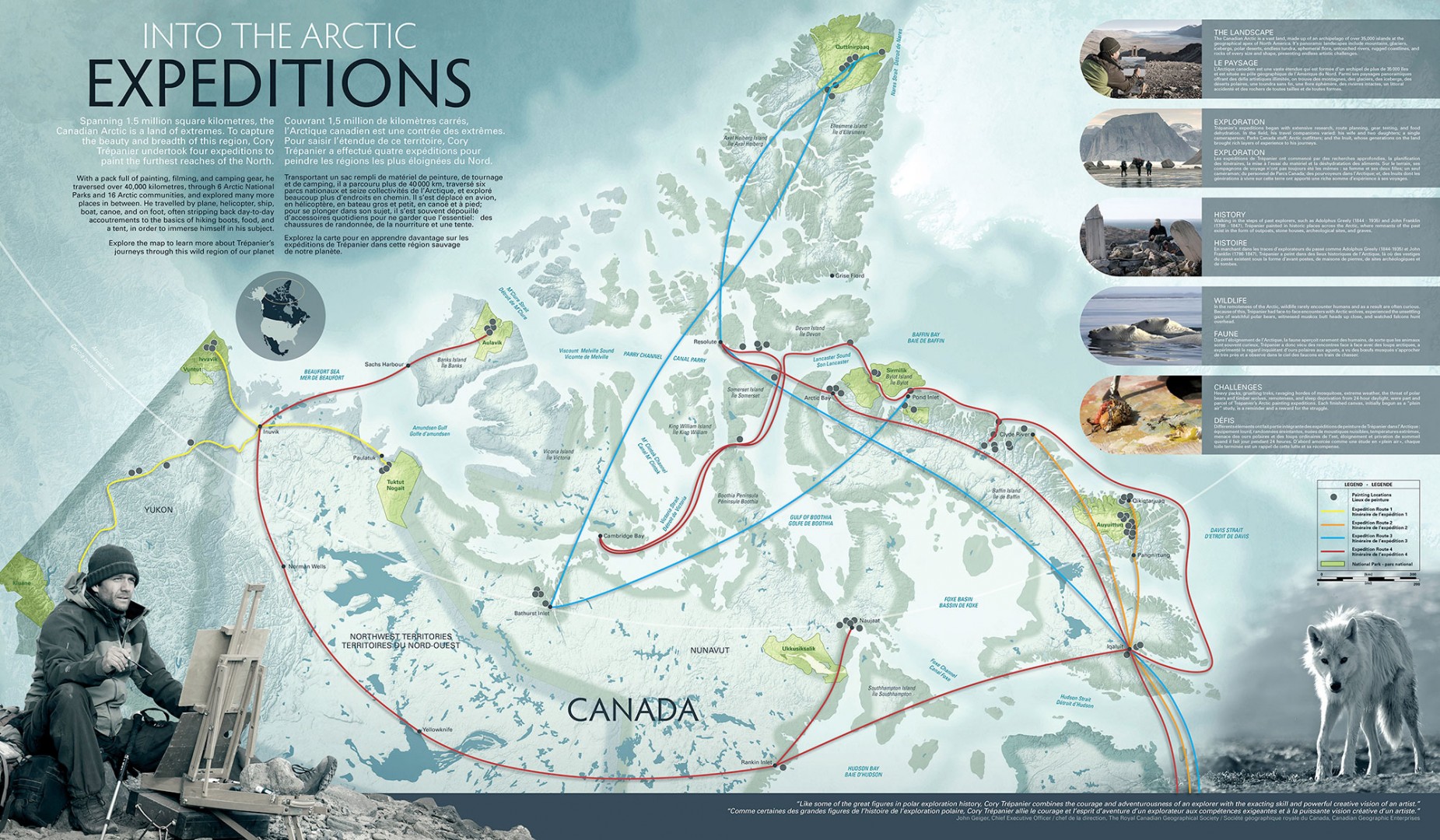 INTO THE ARCTIC Exhibition Tour:  Now Travelling Across the United States

As the culmination of the project, Trépanier’s INTO THE ARCTIC Exhibition Tour is bringing an unprecedented collection of over 50 Arctic oil paintings and 3 films to to the public. The exhibition premiered at the Embassy of Canada in Washington D.C. and is travelling to over 7 museums across the United States in the coming years. At the centrepiece of the collection stands 15 foot wide “Great Glacier”, quite possibly the largest representational Arctic landscape painting in Canada’s history.
View the full tour itinerary and more details here: www.intothearctic.ca/exhibitiontour

“Like some of the great figures in polar exploration history, Cory Trépanier combines the courage and adventurousness of an explorer with the exacting skill and powerful creative vision of an artist.”

“Cory Trépanier’s passionate and accurate paintings of Arctic landscapes bridge the gap between Arctic science and public awareness. This is particularly important because the Canadian Arctic is changing rapidly due to accentuated human-induced climate warming.”

Below: Trépanier’s 15 foot wide Great Glacier painting at the Embassy of Canada premiere in Washington D.C.

Trépanier’s painting expeditions have led him to tackle challenges few encounter, including a knee-punishing trek on Ellesmere Island with a 120lb backpack; enduring ravaging hordes of mosquitoes while painting at the edge of the highest waterfall in the world above the Arctic Circle; being surrounded by Arctic wolves; canoeing up to an iceberg to paint it from a unique floating point of view; and painting Mount Logan, Canada’s highest mountain, from the Kluane ice fields at 10,000 ft… all for the sake of his art.

In 2004, he began shooting his painting expeditions, and now has four televised documentaries under his belt, which include A Painter’s Odyssey, Into The Arctic, Canadian Screen Award-nominated Into The Arctic II, and TrueWild: Kluane. A third and final film in the Into The Arctic trilogy is set to be released later this year.

Trépanier has been featured in media around the globe, and his documentaries broadcast internationally, sharing his passion for the wild places that he explores and paints. Through his unique vision, expressed through art, films, public speaking and online media, Cory hopes to inspire others with our planet’s natural wonders.

Into The Arctic Project: www.intothearctic.ca